Sun, Saints by the numbers 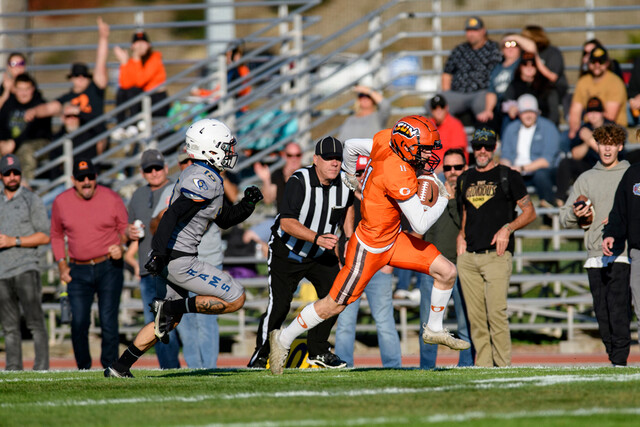 It's been 23 years since the Ontario Football Conference crowned a national junior football champion.

Ironically, it was the 1999 Windsor AKO Fratmen, who beat the Okanagan Sun 32-29 on turf in the Canadian Bowl.

It's those same Fratmen, now the St. Clair College Saints, who hope lightning will strike twice, albeit two plus decades later, in Saturday's national semi-final.

The franchises also haven't faced each other since that afternoon in Windsor.

It's difficult to rely on numbers when trying to compare the two teams since they play in totally different conferences against vastly different opposition.

The Sun also played two more games than the Saints over the regular season so straight up number comparisons will have to be replaced with averages.

But, while the numbers do vary, one thing is very evident - both teams dominated their respective leagues on all three sides of the ball.

So, who has the edge?

Statistically, both teams feature a somewhat balanced attack, but by the numbers, the Saints are the better team on the ground while the Sun feature the better passing attack.

The Saints defence also has a slight edge statistically in yards allowed on the ground and a wide edge in passing defence.

Where the Sun do hold a wide edge is along the front seven, where the Sun amassed 45 sacks, including 24 combined from defensive ends Kelon Thomas and Romereo Reid while the Saints got to the quarterback just 15 times.

Individually, Sun quarterback Dominic Britton threw for nearly 2,100 yards and 24 touchdowns while his counterpart Andrew Brush threw for 794 yards and only eight touchdowns.

On the ground, Jevan Garwood ran for 920 yards and nine touchdowns while Jon Cartier led a balanced Saints ground attack with 466 yards and five scores.

The wild card Saturday could be the Sun return game. Mike O'Shea and Kemarr Bishop combined to return five punts for touchdowns throughout the regular season and playoffs, while Nathan Tonagai also returned a kickoff for a touchdown.

While the numbers show different strengths, it is clear both teams will be facing the stiffest competition they have seen all season long.

The winner Saturday will face the winner of Sunday's Prairie Conference final between the unbeaten Regina Thunder and the Saskatoon Hilltops in the Canadian Bowl Nov. 12 in the home of the PFC champion.