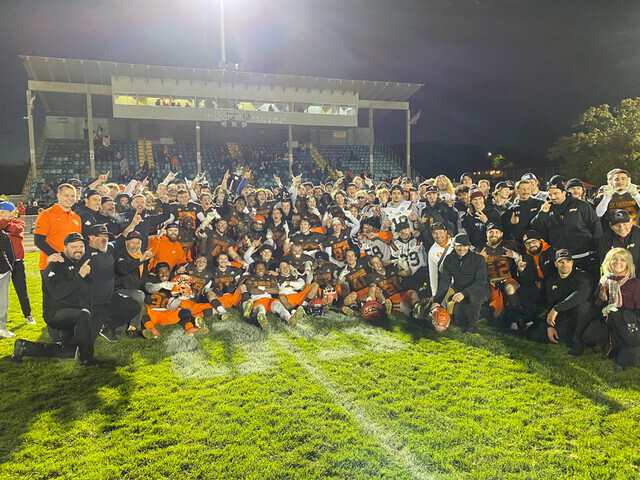 Two teams with unblemished records will go to battle Saturday evening in Windsor, Ont. with a chance to play for a national championship at stake.

The Okanagan Sun, who sailed through the BC Football Conference with a perfect 12-0 record including playoff wins over Langley and Westshore, will face the Ontario Football Conference champion St. Clair Saints who won all eight of their regular season games plus a pair of playoff tilts.

The Sun and Saints are also one and two respectively in the CJFL's Top 10 power rankings.

Both teams also come in off dominating runs through their respective league playoffs.

The Saints took care of Hamilton 44-0 in the semi and arch nemesis London 38-7 in the final.

The Sun bused to Vancouver Wednesday before travelling east Thursday. According to head coach Travis Miller, the early week of practice has been about getting acclimated to the three hour time difference.

"We flipped some of our stuff," said Miller prior to leaving for Vancouver Wednesday.

"(Wednesday) we had a practice early in the morning as we will Thursday, with film in the evening because it's a little bit easier with the travel. We'll continue that pattern the rest of the week, then ease into the game.

"Thursday, we'll get them up at 5 a.m. and start getting them acclimated then to Ontario time."

He says the team has also been practicing this week on artificial turf fields at CNC and Richmond to get them used to the conditions they will face at the stadium in Windsor.

Miller was not willing to divulge his game plan publicly, but did concede the team has been running the ball better as the season has worn on which is advantageous this time of year.

"Late in the season, you want to be able to run the ball because in bad weather games, you can run a bit easier than pass," he says.

It's expected to be about 11 C and clear at kickoff at 7 p.m. Eastern Time.

This is the second time the Sun have travelled to Windsor. They lost 32-29 to the then Windsor AKO Fratmen in the national championship game.

That was also the last year a team from the OFC has won a national title.

The Sun and the previously named Windsor AKO Fratmen