The Okanagan Sun are BCFC champions 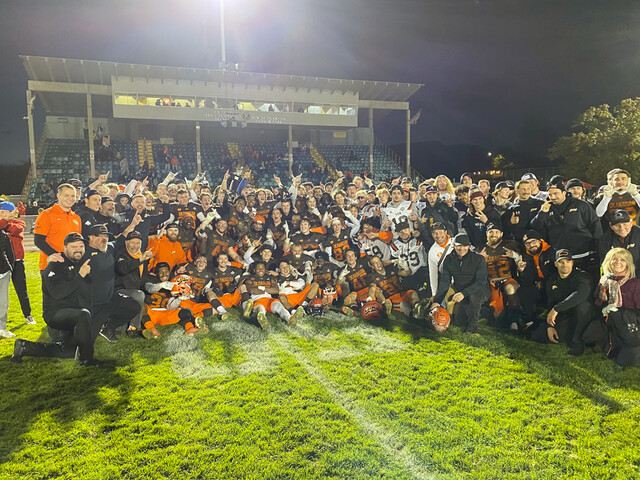 The Okanagan Sun capped off a perfect BC Football Conference season in dominating style Saturday - dumping the Westshore Rebels 38-0 in the league championship game.

The Sun hoisted the Cullen Cup, emblematic of BCFC supremacy, for the first time since 2015 and just the second time in 18 years.

The win was redemption of sorts after last year's 7-4 defeat at the hands of eventual Canadian champion Langley in the title game, and also put an exclamation point on a perfect season.

Anything less Saturday would have been disappointing to say the least.

"I don't even know where to begin," a cold and wet head coach Travis Miller said after being doused with water as the final seconds ticked off the clock.

"Our defence kept us in the game and the offence came out and executed in the second quarter and into the third. It was awesome to see everyone come together."

In typical Sun fashion, it took a while for the offence to find its rhythm...a credit to the Rebels defence which held the Sun to a mere 54 yards of offence in an opening quarter in which they managed just a single point on a wide field goal attempt despite starting two drives well inside the Westshore end of the field.

Penalties and poor execution kept the Sun from building an early lead. Mike O'Shea had a punt return touchdown negated by a holding penalty late in the first quarter and a 63 yard return to the Rebels 10 in the second quarter wiped out by another penalty.

"It's been a season of penalties for us. Some we've got to work on.

"We're better than we were, but not where we need to be."

Liam Attwood nailed a 20-yard field goal with three minutes to go in the half, then with time running down, Dominic Britton drove the Sun 85-yards in five plays in less than a minute, capped off with a 20-yard touchdown strike to Jevan Garwood just 11 seconds before the break.

The Sun took the opening kickoff in the second half and, two plays in Britton hooked up with O'Shea for a 56-yard strike.

Britton just missed hooking up with O'Shea on a few long passes in the first half, but with O'Shea well behind the defender, threw a perfect strike for an 18-0 lead.

The Rebels fumbled the ensuing kickoff and, with excellent field position at the Westshore 13, Britton needed just two plays before calling his own number from one yard out.

The veteran QB hooked up with Colby Milleto from 17 yards out on their next possession for a commanding 32-0 lead.

It was Milleto's fifth touchdown catch in two playoff games.

Tristen Peddle sprinted in from eight yards out in the final minute of the came to put the cap on the game.

The Sun rolled up over 400 yards in total offence with a balanced attack that, unofficially included 170 yards on the ground and 236 through the air.

The front four gave Britton plenty of time to pick out his receivers.

The defence, as they have all season, were beasts, and held the Rebels at bay long enough to give the offence a chance to get untracked.

The defence forced two fumbles, an interception and made life miserable for the league's top offensive player, quarterback Tim Jessie.

The front four got to Jessie for five sack and allowed just 108 yards of total offence in the game. The Rebels running attack was a non factor, accumulating a mere 32 yards on the evening.

"It's special," O'Shea said of closing out his home career ins style.

"But, there's two more to go. That's what we're looking at. We're going to celebrate tonight then move on a focus on the next game."

That next game will be a date in the national semi-final next Saturday in Windsor, Ont.

The Sun will face the St. Claire Saints for the Intergold Cup, a trophy the Sun have won on four different occasions, including in 1998 when they beat these same Saints, then the Windsor AKO Fratmen 27-10.