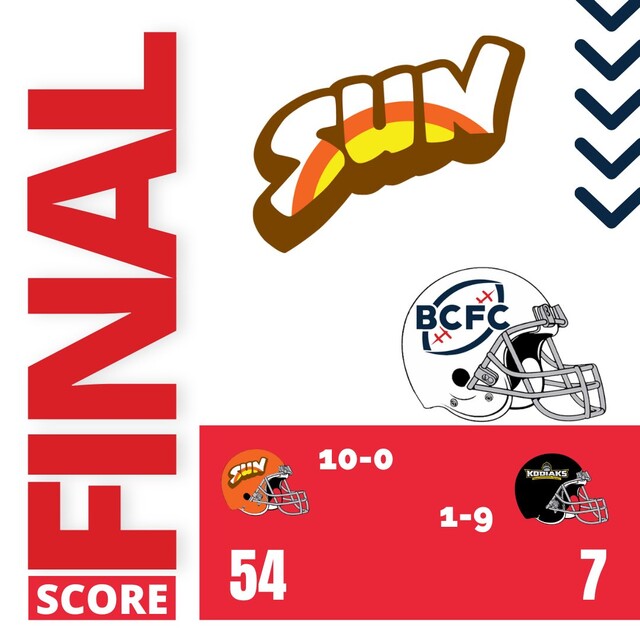 For the first time in seven years, the Okanagan Sun will roll into the BC Football Conference playoffs with an unblemished record.

The Sun capped off their first perfect 10-0 season since 2015 with a resounding 54-7 victory over the expansion Prince George Kodiaks Saturday evening.

Quarterback Dominic Britton engineered three touchdown drive by the five minute mark of the second quarter before taking a seat on the bench the rest of the night. Avery Clayton and Liam Kroeger split duties under centre the rest of the way.

By the third quarter, many of the starters joined Britton on the sidelines to avoid any unnecessary risk of injury.

The Sun got on the board nine minutes into the contest when Britton, aided by a roughing the passer penalty, march the Sun 76 yards in five players, culminating in a 53 yard strike to a wide open Mike O'Shea down the right sidelines.

One play after Phillip Palmarin blocked a punt deep inside Kodiaks territory, Britton again found O'Shea of a screen pass.

The second-year receiver did the rest, slashing his way down the left sideline for a 21-yard touchdown.

The lone bright spot for the Kodiaks came early in the second quarter, when Keon Raymond II returned a wide 30 yard field goal 125 yards for their lone touchdown on the night.

Britton marched the Sun down the field on the ensuring possession, hooking up with Noah Bymak for a 44-yard score on third and two.

They built the lead to 28-7 just before the half ended when Aiden Wiberg scampered 30 yards for his fourth major of the season.

Nathan Tonagai electrified those Sun fans in attendance, taking the opening kickoff of the second half 108 yards to put the visitors up 35-7.

Kemarr Bishop closed out the scoring with a 71 yard punt return.

Liam Attwood also booted a 37 yard field goal while the Sun put up two more points on a conceded safety.

Lineman Kelon Thomas led a swarming defence with a pair of sacks and a fumble recovery, one of four turnovers the Sun created on the evening. They also blocked two punts and came close to two or three others.

The Sun, who concluded the season 10-0, will host the 5-5 Langley Rams in one semi-final next Saturday.

The reigning national champions have eliminated the Sun from the playoffs the last two seasons.

Westshore Rebels will host the Valley Huskers in the other semi-final.