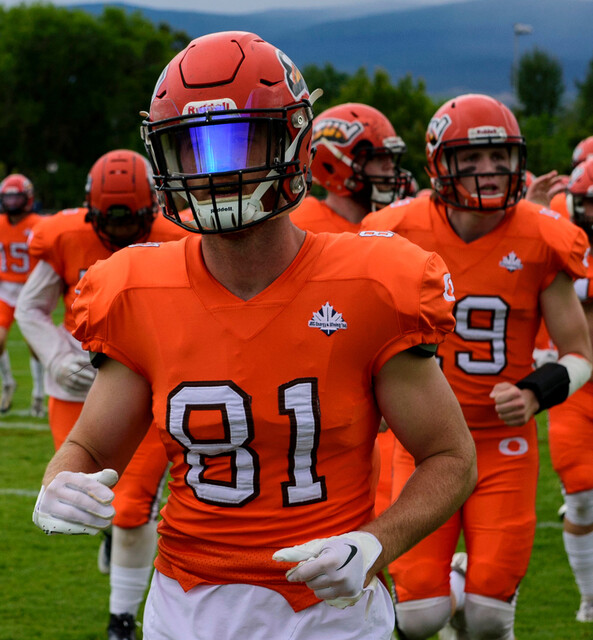 The Okanagan Sun didn't make it easy on themselves, but a fourth quarter rally keeps a perfect season alive.

Trailing throughout much of Sunday's contest in Kamloops, the Sun rallied with 20 unanswered points in the final quarter in a come-from-behind 41-24 win over the Broncos.

The win moves the Sun to 9-0 and eliminates the Broncos from any chance of securing a playoff berth.

Britton hooked up with Mike O'Shea on a 37 yard strike a minute in, then connected with Blaise Beauchemin from 18 yards out the put the Sun ahead 35-24.

A pair of field goals late in the quarter sealed the 41-24 victory.

Turnovers were the thorn in the side of the Sun in the opening half, leading to all 17 Bronco points.

Evan Guizzo hauled in a three-yard touchdown pass after a muffed punt return gave the Broncos the ball deep inside Sun territory.

They made it 10-0 on a Cohen Freeze field goal following the first of two Britton interceptions.

Leading 10-7 in the final moments of the half, Scott Poelzer ran a Britton interception back 44 yards to put the Broncos up 17-7.

With 23 seconds left and the ball at their own 50, Britton hit a wide open Beauchemin down the right sideline for a 60 yard touchdown.

The teams traded touchdowns in the third before the Sun ran away and hid in the fourth.

Britton also hit Farrell Yakam Kenfack for a 16 yard major while Jevan Garwood ran in from three yards out for the other.

The Sun will close out the regular season next Saturday in Prince George.

The first round playoff match ups were also determined on the weekend. Langley's win over the Prince George Kodiaks mean the Rams will face the Sun in one semi, while the Westshore Rebels and Valley Huskers face off in the other.


Cover your team's games! Write up a story and email us [email protected]astanet.net for publication here.