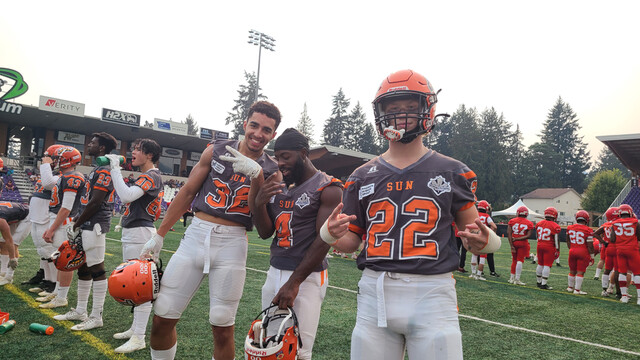 The Okanagan Sun have been front runners over the first half of the BC Football Conference season in piling up a perfect 5-0 record.

Saturday, they showed they could claw their way back from a deep, early hole to win on the road.

The Sun trailed for the first three quarters before mounting a fourth quarter comeback to edge out the hometown Westshore Rebels 34-31.

The Rebels Jumped on the Sun early. Quarterback Tim Jessie marched them the length of the field on the opening drive, capping it off with a touchdown strike to Cairo Berry.

After a mishandled snap on a punt put the Rebels at the Sun 28, Jessie wasted little time finding the end zone, connecting with league-leading receiver Kieran Poissant.

The Sun got on the board on their next possession with Dom Britton, who sat out the last game with a minor injury, hit Noah Bymak for a long touchdown, but the Rebels came right back when Jessie connected with Poissant for his second major of the half to put the Rebels up 21-6.

The Sun got a much needed boost near the end of the half when Colby Milleto made a spectacular catch to cut the deficit to 21-13 at the half.

The defence, which has a hard time handing the Rebels in the first half, turned things around over the final 30 minutes.

They blocked a field goal early in the third quarter, they got a key turnover when Tyler Going intercepted Jessie, and they finally put pressure on the Rebels quarterback. Defensive end Kelon Thomas recorded three sacks on his own.

The momentum also sparked the offence. Javon Garwood scampered in to cut the deficit to 24-20 heading into the final quarter.

The Sun took their first lead in the fourth quarter when Britton and Mike O'Shea hooked up to give the visitors a 27-24 lead. They extended it to 10 on their next possession, when Britton ran in himself.

The Rebels got a late touchdown to make the score close.

The Sun are now 6-0 on the season while the Rebels, who have lost both games to the Sun, fall into a second place tie with the Valley Huskers at 5-2.

The Huskers pulled into the tie with a 62-41 thumping of the VI Raiders while the Langley Rams improved to 3-4 with a 43-16 win in Prince George. They're a half game better than 2-4 Kamloops who were idle this weekend.

The Sun host the Huskers next weekend, looking for a win to all but clinch the BCFC regular season title and home field advantage throughout the playoffs.