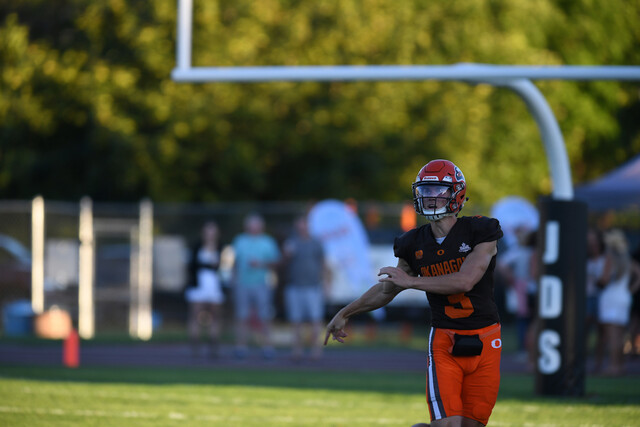 The Okanagan Sun will get their first look at the expansion Prince George Kodiaks when the two teams clash Saturday afternoon at the Apple Bow.

The game closes out the Sun's three game homestand.

The Kodiaks, who joined the league in time for this season, have been competitive over their first four games, culminating in their first ever win, a 28-20 home field victory last weekend against the Valley Huskers.

And, while Saturday's game represents a step up in competition for a Prince George team which has faced the Huskers three times and Kamloops once over those four games, it's a team Sun head coach Travis Miller says they can't take lightly.

"Prince George I think is a budding team. They've been getting better every single week, culminating last week with a win over Chilliwack which we believe is a top-four team in our conference," said Miller.

"We don't want to look pas them in any way, and make sure we execute when they are here in town."

The Kodiaks are led by head coach Keon Raymond, who spent nine seasons in the CFL, mostly with the Calgary Stampeders, where he won a pair of Grey Cups in 2008 and 2014.

On the field, they're led by dynamic defensive backs Keon Raymond II and Marcellus Pope, the son of another former Stampeder, Marvin Pope.

Miller says the Sun offence will make sure they know where both are in coverage as much as possible.

"Obviously you always want to know where the start players are and make sure to identify them so you can either ensure you are not attacking them or you are attacking them in a way that allows you to have the benefit.

"We will definitely we looking where they are and some of the other players they have on defence. They are a great team and getting better each week."

The Sun come into Saturday's game the only unbeaten team in the BCFC, outscoring the opposition 123-30 during the first two games of this three game homestand.

Much of the offensive success can be chalked up to the play of quarterback Dominic Britton, who has spread the ball around to a deep and talented receiving core.

"It's a luxury most teams don't have. From our perspective, we feel we have eight receivers that are multi-talented and some rookies you don't see too often because of the guys in front of them."

Miller says five of the eight receivers are also homegrown products which is not only a testament to the local minor football system but also the tenaciousness of the players.

"They are every bit as mashed up as any player coming from across Canada. They are willing to put their head down and either block or catch the ball..catch a screen pass for multiple yards like Noah Bymak did last week, or go deep and catch it in the end zone like Mike O'Shea."

Having the depth, he says, gives the Sun the luxury of rotating players through and keeping them fresh game in and game out.

Saturday's game is scheduled to kickoff at 4 p.m.