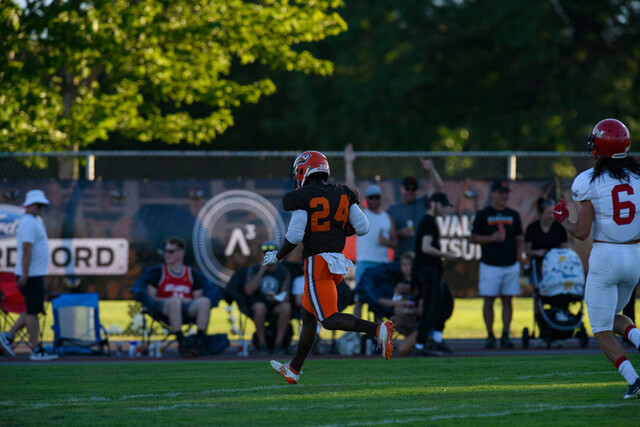 This one was never close.

The battle for top spot in the BC Football Conference was as one-sided as a game of this magnitude could get.

The Okanagan Sun, in their home opener, dismantled the previously unbeaten Westshore Rebels 65-29, a score which in some respects flattered the visitors.

The Sun scored early, they scored often, and in every way imaginable, on offence, on defence and special teams.

The only blip was a safety they conceded when hemmed inside their own 10 on their first possession.

It didn't take long to flip the script.

Mike O'Shea, as he did during much of his rookie season, ignited the bench and the crowd, taking a punt following the Rebels first possession at his own 31, found a seam and galloped down the right sideline to paydirt.

Aiden Hennessey recovered a fumble on the Rebels next offensive play, setting the Sun up at the Westshore 37.

Four plays later, Dominic Britton hit Colby Milleto from eight yards out for the first of his five touchdown passes on the night.

On their next possession, Britton needed just three plays to find the end zone. One second-and-10, he found running back Jevon Garwood on a middle screen, and the speedy back did the rest, outrunning the defence for a 76 yard touchdown.

They had to settle for a Liam Attwood field goal on their next possession after getting great field position following Isaac Wegner's first pick of the season.

They blew it open in the second, outscoring the Rebels 28-6 to take a 51-8 lead into the locker room.

"We saw what we thought we were going to see, a strong offensive team, very good at running the ball and throwing the ball, and we just happened to match up what they were doing and pick em off when we needed to," said head coach Travis Miller, downplaying a 36 point victory.

"It was a great game. Our guys matched the intensity of Westshore, and we came out firing on all cylinders."

Britton opened the second quarter much the way he ended the first, hitting O'Shea from 21 yards out on the first play after the Sun recovered another Rebels fumble.

After a pair of Westshore field goals, the Sun offence took advantage of another Rebels mistake. A roughing the kicker penalty gave the Sun the football again on their own 43.

Britton hooked up with Coltin Peterson on a 30 yard strike. A roughing penalty set the Sun up on the 23 where Garwood finished off the drive with a spectacular run, breaking through five or six tackles before bulling his way into the end zone.

"I just followed my blocks and, you know, kept going," said Garwood.

"Jevon is playing out of this world," added Miller. "We knew he was going to be as strong player for us, but today he really showed who he is."

Hennessey scooped up another fumble on the Rebels next possession and rambled 47 yards for another major before Britton hit Blaise Beauchemin with a 17-yard strike in the dying moments of the half.

The same two hooked up a second time on the final play of the third quarter before Tristen Peddle barrelled in from a yard out following another Rebels turnover to closeout the Sun scoring.

The Rebels got two late touchdowns against the Sun second string to close out the scoring.

Unofficially, Britton finished the night 12 of 23 for 319 yards, and five touchdowns. The five majors equalled a career high set during an 87-0 thumping of Kamloops last season.

Garwood had 150 yards of all purpose yardage, 74 on the ground on nine carries and the one touchdown catch of 76 yards.

The Rebels managed more than 360 yards of offence, however much of that came in the second half when the Sun started emptying their bench.

The Sun forced six turnovers while turning the ball over just twice.

At 3-0, the Sun now sit atop the BCFC standings, ahead of the 3-1 Rebels by virtue of the head-to-head tie breaker.

They'll host the VI Raiders next Saturday night at the Apple Bowl.