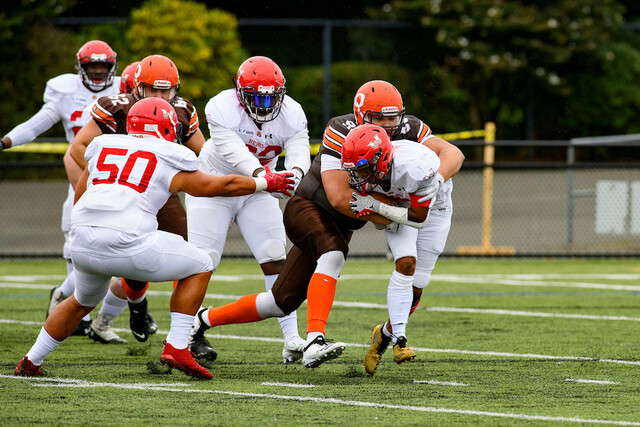 The backdrop for the Okanagan Sun home opener couldn't be more compelling.

A first place showdown against a team led by your former coach under the bright lights of the Apple Bowl.

With the sudden implosion of the reigning national champion Langley Rams (0-3), it appears as if the battle for top spot may come down to a pair of head-to-head contests between the only two undefeated teams left in the BCFC, the 2-0 Sun and the 3-0 Westshore Rebels.

The schedule maker couldn't have scripted a better opponent for the Sun home opener Saturday evening than a date with the Shane Beatty-led Rebels.

"Honestly, I don't know that I have seen the guys more excited about a home game, and an opportunity to play for first place. It's going to be great."

The Rebels have climbed to the top of the league with a high-powered offence and stout defence. The team has average 40 points a game while allowing opponents just 15 per contest.

Beatty, as he has shown during his time with the Rebels and the Sun is as fiery and as intense as any coach in junior football anywhere in the country.

And, Miller says, this team is playing with that same personality.

"They are an extremely talented team, very intense team on and off the field.

"They are very well coached and they mimic their head coach, so you know you are getting the best of that team."

The Rebels are led by quarterback Te Jessie, who leads the BCFC in yards through the air (785), touchdowns (8), completions (46) and completion percentage (62.2%).

They feature two of the top three receivers in Kieran Poissant and Zion Brown-Dogbie and the number two rusher in Gerren Hardisty.

"From our standpoint they are the team to beat in our conference," said Miller.

"Shane has them completely primed and ready to go and that defence is solid across the board. It's a match made in heaven."

The Sun have struggled somewhat of the gate despite their 2-0 record. They have had a hard time moving the ball consistently on offence, mainly due to untimely penalties while the defence has been guilty of giving up some big plays.

The defence has also shown a consistent ability to get after the quarterback and make big stops at key points in the game.

Saturday's game, the first of three straight at home for the Sun kicks off at 7 p.m.