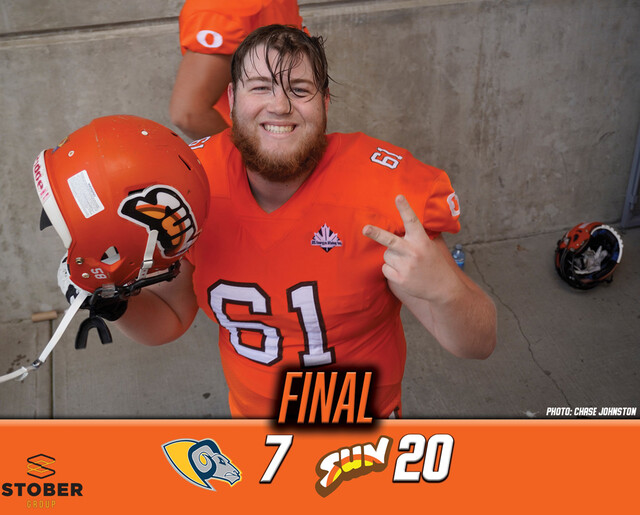 The Okanagan Sun needed another big second half to turn the tables on the rival Langley Rams.

The Sun had marked this game on the calendar as soon as the schedule was released - looking for payback in a building where their season came to a sudden end a year ago.

But it took a stout defensive effort and a 17-point second half to pull it off.

The Rams got on the board on their opening possession when surprise starter Tristen Secord-Yanciw marched the Rams down the field before hitting Alex France with a 46-yard touchdown strike.

The Sun defence held firm the rest of the way, bending at times, but never breaking.

The Rams only threat came at the end of the first half, when they failed to get anything after getting a first-and-goal at the Sun one while nursing a 7-3 lead.

A delay of game penalty took the ball to the 11, then three plays later on third down from the three, the Sun snuffed out a screen pass at the line of scrimmage to take the ball on downs.

The only Sun points came on a 22-yard field goal from Marcus Burden. The score was set up by Mike O'Shea's punt return inside the Langley 20.

Untimely penalties were the story for the Sun in the first half. A Jevon Garwood run to the one-yard line on third-and-two was wiped out by a holding penalty. Holding penalties also wiped out long gains that could have helped the Sun get into scoring position.

The Sun took over in the second half thanks in large part to a pair of fake punts.

After burning the Rams once for a first down on a fake punt on their first possession of the second half, the Sun ran the same play on their next possession as Matt Lord took the ball into Rams territory.

A few plays later, Dominic hit a streaking O'Shea down the middle for a 39-yard strike.

They never looked back.

Midway through the fourth, Britton capped off a five-play drive with a five-yard run to put the Sun up by 10.

The touchdown was set up by a 35-yard strike to Noah Bymak down to the Rams 20. A horse collar tackle moved the ball to the five.

Burden closed out the scoring with a 23-yard field goal in the dying seconds. The three pointer came seconds after a touchdown pass to Nathan Tonogai was negated by an illegal block.

The Sun forced two turnovers and the Rams one, all on downs.

Saturday's win moves the Sun to the top of the BCFC standings after two weeks while the Rams are reeling after dropping their first two.

The Rams play in Chilliwack next weekend while the Sun get the weekend off.

They'll return to the field Saturday, Aug. 13 when they entertain the unbeaten Westshore Rebels in their home opener.