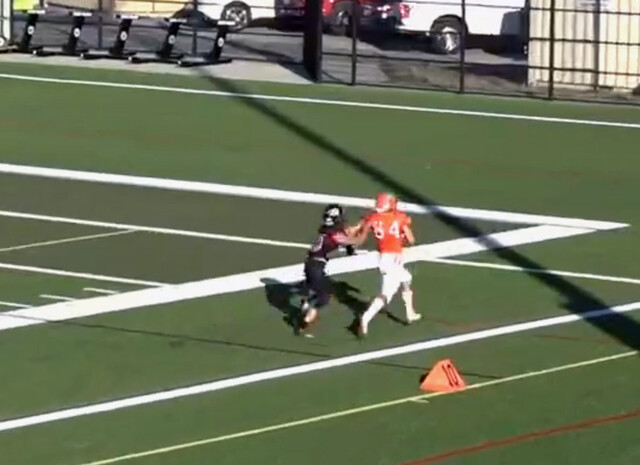 The Okanagan Sun broke open a tight game with five second half touchdowns in a 50-19 dismantling of the VI Raiders in the BC Football Conference opener for both teams Saturday in Nanaimo.

But, the game too a backseat to a horrific injury to Nanaimo offensive lineman Gage Geiger with just over two minutes left and the Sun leading 36-13.

Geiger was tended to by medical staff from both teams for more than half an hour before paramedics arrived to take him to Nanaimo Regional Hospital.

The extent of the injury is not yet known.

The Sun started slowly - unable to take advantage of great field position throughout the opening quarter. They began their first four drives on the Raiders side of the field, but were only able to come away with 10 points, a Liam Attwood field goal from 19 yards out and Tristan Peddle's two yard run.

The Raiders held the lead briefly in the opening quarter when Ben Chomolok hit Moren Bradbrooke with a 75 yard major on the first play after Attwood opened the scoring.

A conceded safety late in the quarter and Attwood's second field goal of the half from 34 yards out, set up by JJ Heaton's first career BCFC interception, put the Sun up 15-7 heading into the locker room.

The Raiders did move the ball in the second quarter, but interceptions by Nick Bannister and Heaton deep in Sun territory snuffed out both drives.

The Sun had chances to add to the lead in the open 30 minutes, but a fumble on the Nanaimo six ended one drive and the half ended with the Sun on the VI 13, thinking they had time for one final play.

It was a different team in the second half.

Dominic Britton, who completed just nine of 8 in the opening half, was more effective throwing the ball over the final 30 minutes.

He scrambled to buy time before hitting a wide open Noah Bynak for a 70 yard strike on their second possession of the half.

After Chomolok and Bradbrooke hooked up for a second major, the Sun took over, scoring four unanswered touchdowns to hit the 50 point mark.

Britton ran in from one yard out late in the third quarter then defensive back Garrett Cape scooped up a fumble and ran five yards early in the fourth to put the Sun up 36-13.

After the injury to Geiger, backup quarterback Liam Kroger marched the Sun down the field, capping off a three play drive with an eight yard strike to Farrell Kenfack.

Grayson Stratham scooped up a fumble on the ensuing kickoff and ran 12 yards for the Sun final touchdown of the night.

One the last play of the game Kroger, attempting one final pass, was hit and fumbled, allowing the Raiders to scoop up the fumble and rumble the length of the field for one final score.

The Sun did receive a bit of a scare when Britton briefly limped off the field after taking a hard hit in the third quarter. He missed just three plays before returning.

Unofficially, Britton was eight for 10 for 172 yards, one touchdown and one interception during an efficient second half.

The Sun take their 1-0 record into Langley next Saturday to face the reigning national champion Rams.

The Rams opened defence of their national championship on a sour note, opening the 2022 season with a 36-20 defeat at the hands of the Westshore Rebels.

The Sun will open their home schedule Saturday, Aug. 13 against the Rebels.