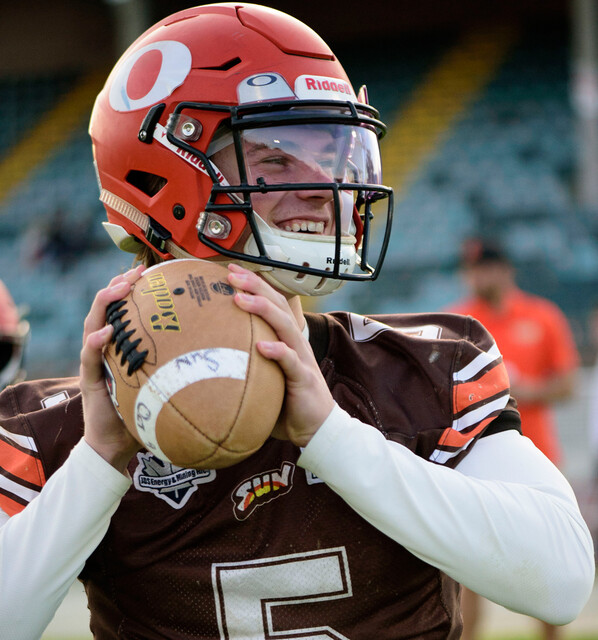 The Okanagan Sun enter the 2022 BCFC season with some unfinished business to attend to - and a new head coach to guide them there.

They kick off the new campaign on the road Saturday against the VI Raiders in Nanaimo.

The Sun are looking for redemption after a disappointing end to 2021, a 7-4 defeat in Langley in the BCFC final, a game in which they managed just 51 yards of total offence and six first downs against the number one defence in the nation.

First year head coach Travis Miller says the team is fired up for the start of a new season.

"It's been a year or more waiting to get on the field and, after last season and the way it ended, I'm sure guys are super jacked about getting on the field and showing what they did in the off season," said Miller.

"Unfinished business is a very apropos way of describing it."

Miller, who took over head coaching duties after Jamie Boreham abruptly tendered his resignation in March, says he's looking forward to seeing what the team can do in a live situation after a lengthy training camp and just one pre season game last weekend against Kamloops.

"I'm hoping we come out and showcase exactly what we've been practicing the last three and a half weeks. it's been a long camp, twenty some days, and our kids have been putting in the work.

"I'm just excited to see them in a live fire situation and hopefully play up to the ability we think they can and see where the cards fall after that."

Miller and the Sun will come into the 2022 with a different look than a year ago when they rode the legs of CJFL offensive player of the year Malcolm Miller who graduated after last season when he led the nation in rushing with 1,367 yards.

That included a team record 341 yard effort against the VI Raiders.

"You can't replace a Malcolm Miller overnight, but we luckily have three running backs who are probably CJFL calibre running backs for any team, so we are confident in the group that we have...trio of athletes who will bring different things to the table."

With Malcolm Miller in the backfield, the Sun were a run first team in 2021. But, coach Miller expects that script to flip this season.

"I think our receiver group is the strength of our offence," said Miller.

That group will be led by sophomore Mike O'Shea, who led the BCFC will 11 touchdown receptions last season.

Quarterback Dominic Britton is also back to guide the offence.

On the defensive side of the ball, Miller says that group was a special unit in 2021, one of the best the CJFL has ever seen.

And, while they return a good portion of the group this season, Miller says there are some graduating players you just can't replace overnight.

"Similar to Malcolm Miller, you're not finding a James Stockwood hanging around anywhere. From our perspective, we just want to make sure our guys are sound and strong and playing to their strengths.

"From there we are hopefully able to play team defence as a group and support each other whether it's in the run or pass game."

The Sun will play in Langley next weekend before hosting Westshore Rebels in their home opener Aug. 13.