The Okanagan Sun won the battle but not the war, falling just short of first in the BCFC 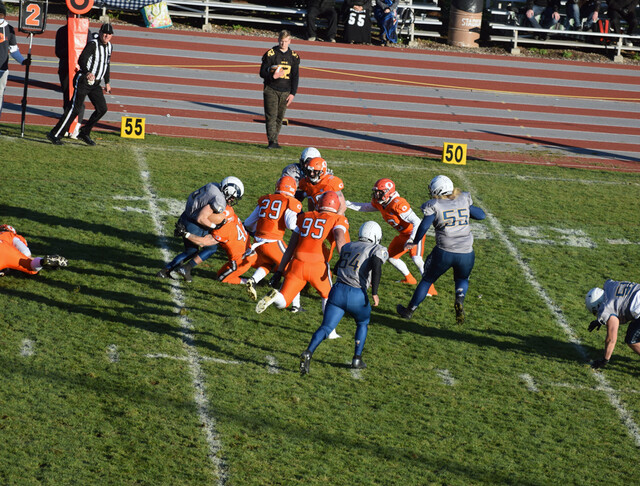 The Okanagan Sun had numerous chances to do what they had to to claim first place in the BCFC and home field advantage throughout the playoffs.

But, when the dust settled, they came up a few yards, and a single point short.

The Sun 13-6 victory over the Langley Rams left the teams deadlocked with identical 7-1 records, and a 13-13 tie in the head-to-head meetings. Langley finishes first based on allowing fewer points scored over the course of the season.

The game, played before a raucous crowd at the Apple Bowl was every bit the defensive struggle it was billed to be.

And, while it was the Sun defence that created great field position deep inside Langley territory, it was the Rams defence, and some untimely miscues by the Sun offence, that allowed the Rams to leave Kelowna with first place firmly tucked in their pocket.

An interception at the Langley 27 late in the first quarter gave the Sun their first chance to get a leg up, but they managed only two yards, and had to settle for a Liam Attwood 32-yard field goal.

Midway through the third, the Sun fell on a fumble at the Rams six but, after two running lays put the ball on the one, quarterback Dominic Britton bobbled the snap on third-and-goal, turning the ball back to the Rams.

Late in the fourth, up 10-6, Britton and receiver Mike O'Shea hooked up on a 39-yard strike, setting the Sun up with first-and-goal at the Langley two.

However, a procedure penalty moved the ball back to the seven, forcing the Sun to settle for Attwood's 18-yard field goal.

The game was tied 3-3 at the half as neither team was able to mount much of an offence.

It stayed that way through the third quarter and, just as it looked as if the game would end in a deadlock, O'Shea shook free from a defender down the middle of the field, and Britton hit him in stride for a 55-yard touchdown 90 seconds into the fourth.

It was their biggest offensive play of the night.

Needing eight to secure first place, Boreham sent Attwood out to convert the touchdown rather than try for two.

"Yea we thought about it a lot. But, with time left in game and situation, and we have a great kicker. We were willing to put it on our kicker's foot."

On the ensuing possession, Langley quarterback Michael Calvert connected on a 65 yard strike to Daniel Kubongo down the left sideline.

The play set up a 20-yard field goal from Tato Ferreyro Araya, cutting the deficit to four.

On their ensuing drive, with under two minutes to go, sure-handed Malcolm Miller coughed up the ball on a third-and-one at the Rams 36.

The Sun held, forced a punt and, in the dying moments, Britton found Kyle Zakala for a 39 yard strike, putting the ball at the Rams 23.

Miller scampered for eight yard to the Langley 15.

The Sun let the clock run down to zero, but took too long getting the field goal team out on the field. The ensuing 10-yard penalty for delay of game put the ball back on the 25.

Liam Attwood's field goal attempt looked to curl just inside the right upright, but was ruled no good. The Rams ran the ball out, preserving the seven point margin and securing top spot.

Boreham said there was some talk about trying to punt for the single.

"We thought about that but it was chilly out. Ball's cold, air's cold.

"The ball doesn't travel that far and we weren't averaging 40 yards a kick, so that leaves us five or 10 yards short in the end zone. So, putting it on our kickers foot, I've been in that situation in the CFL."

Britton finished the game 11-16 for 205 yards and a touchdown. Most of that came in the fourth quarter, when he completed eight of 11 for 195 yards.

Miller, who set a single-season rushing record, was held to just 79 yards on 23 carries. He also caught three passes for 36 yards.

The Sun will face the VI Raiders, who beat Chilliwack Saturday in one semi final while the Rams will host the Valley Huskers.

Game time for next weekend's semi-final at the Apple Bowl will be determined early next week.