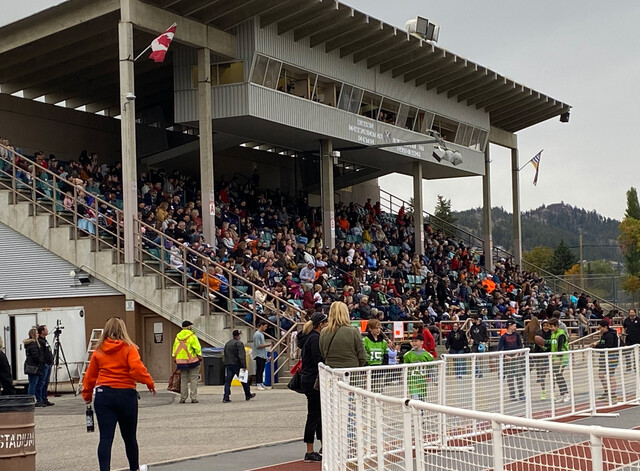 Photo: Jayden Wasney
Sun fans had a lot to cheer about at the Apple Bowl Saturday.

The Okanagan Sun gave their football-starved fans something to cheer about Saturday.

A crowd of 2,300 looked on as the Sun amassed 642 yards in total offence and scored 11 touchdowns in an 87-0 beat down of the winless Kamloops Broncos.

It was the first game at the Apple Bowl in more than two years after the entire 2020 season was wiped out due to COVID-19, and the start of the home schedule was delayed because of extra restrictions placed on the Interior Health region.

The Sun compiled 239 yards on the ground and 403 through the air, while putting points on the board every time they had the football.

He has now run for 979 yards on the season, well within reach of the club record of 1,236 set by Ron Arnold in 1997. His nine rushing touchdowns are four shy of the record 13 set by Noel Chipman 31 years ago.

Quarterbacks Dominic Britton and Alex Douglas combined for six touchdown passes, including five by Britton, who threw for 322 yards.

Kyle Zakala was the busiest of the group, catching five passes for 145 yards and a touchdown.

Mike O'Shea Junior, who came into the game with a league-leading eight touchdowns, added two more to that total, finding the end zone on his only two receptions.

The offence, which had given the ball away 14 times including a league-leading nine interceptions, went mistake free Saturday.

The team also cleaned up its penalties, flagged for a season-low 85 yards by the officials.

The loss was the Broncos 25th straight dating back to 2017 while the Sun, 5-1, stay even atop the BCFC standings with the 5-0 Langley Rams.

The Sun host the VI Raiders next Saturday night before what should be a first place showdown against the Rams at the Apple Bowl Oct. 30.