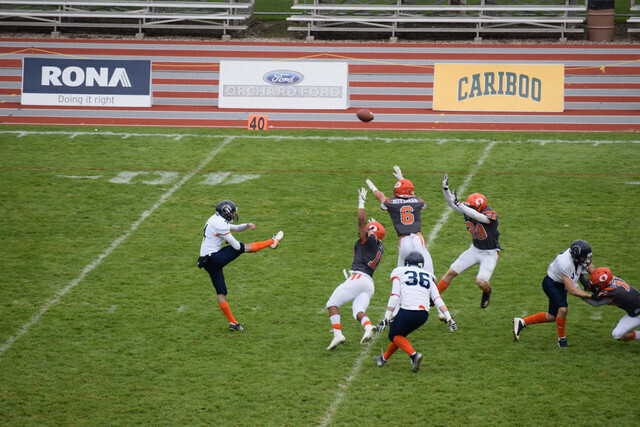 A COVID-capacity crowd of 2,300 is expected to greet the Okanagan Sun tonight when they return to the Apple Bowl field for the first time in more than two years.

After last season was postponed due to COVID-19, and the home start to this season was delayed, Saturday's game against the Kamloops Broncos will be the first time the Sun have played before the home fans since Oct. 6, 2019, a span of 733 days.

"It's been a while, so the guys are pretty excited about being in their own locker room and coming out onto their own field and playing in front of our fans," said head coach Jamie Boreham.

"We're looking forward to a good one."

The Sun come into Saturday's tilt the most dominant offensive team in the BCFC, putting up 190 points in five outings, including last Sunday's 50-7 beatdown of the same Broncos in Kamloops.

"When you can run the ball in Canadian football, it's a really good thing. The running backs in general are doing the job but Malcolm is shining, and we're happy for him and happy for the success he's having. It's generating success for the team.

"But Malcolm is running hard. This is the best version of Malcolm Miller that I've seen and our team has seen. He has come here with an inspired running style and he's running with a purpose."

With a 4-1 record, the Sun have been getting the job done away from home, knowing now that their final three games will all be on home turf.

While much of the focus offensively has been on the running game, Boreham says the passing game, which has struggled with consistency, is starting to show signs of coming around.

Defensively, the club is third in the league with 16 takeaways and has recorded 10 sacks, while on special teams, the Sun have three kick returns for touchdowns, the only three registered in the league this season.

Despite their success, Boreham says there are some things the team needs to clean up.

One is turnovers, where the club has turned the ball over 14 times including a league-high nine interceptions.

After being assessed nearly 500 yards in penalties over the first four games, things came to a head last weekend, when the Sun were flagged 27 times for 210 yards, causing the team a shutout while also taking at least seven points off the board.

"It makes me a little sick to my stomach. We don't practice that way," said Boreham.

Saturday's game will be a sellout.

All 2,300 tickets, made available free of charge through Skogie's Car Wash and Safeway, have been distributed.