The Okanagan Sun ran roughshod in the first half, scoring 37 points in a 50-7 win in Kamloops 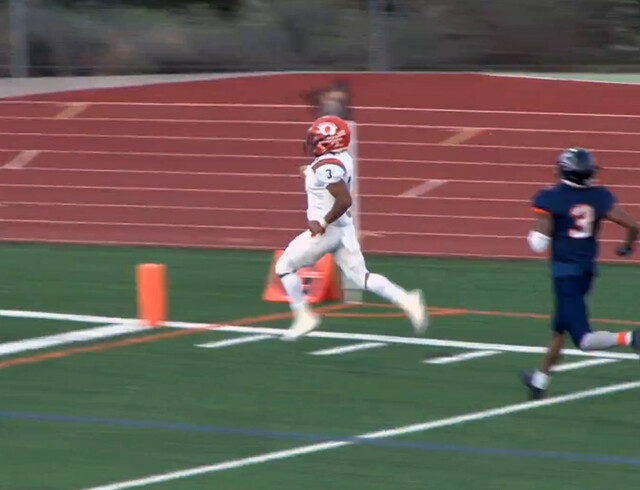 The loss was the Broncos 24th straight dating back to 2017.

O'Shea, who came into the game as the league-leader with five touchdowns, hauled in a pair of strikes from Dominic Britton during a dominant second quarter, then returned a punt 83 yards to seal the victory.

Miller, coming off a 325 yard effort a week ago in Nanaimo, unofficially busted free for 150 yards on 15 carries and two touchdowns.

The Sun got on the board with a single on the opening kickoff on what was a blustery, windy evening in Kamloops.

After the Broncos conceded a safety, the Sun needed just three plays to go 75 yards, punctuated by Miller's 57 yard touchdown scamper down the right sideline.

Trailing 10-0 early in the second quarter, the Broncos fumbled after a 25 yard gain into Sun territory. Garrett Cape took the loose ball to the Kamloops 24.

It was the first of four turnovers on four consecutive possessions, leading to 24 Sun points.

Liam Atwood hit from 34 yards out following the Cape recovery to put the Sun up 13-0.

Jaden Playfair fell on a loose ball on the next Kamloops offensive play, setting up Miller's six-yard touchdown run.

After the Broncos turned the ball over on downs on their next possession, Britton hit O'Shea from 24 yards out.

On the ensuing kickoff, the Broncos muffed the return, again giving the Sun the ball inside the Kamloops end of the field.

Leading 37-0 at the half, most of the starters found themselves watching from the bench.

O'Shea, who already had a 79-year punt return for a touchdown, added an 83 yard return early in the fourth.

Atwood booted three field goals and, with the wind at his back, was wide on a 54-year attempt in the third.

The only negative to an otherwise impressive performance was the number of major penalties the team took.

The Sun were flagged for 110 yards in penalties in the first half alone, and well over 200 for the game.

Several of those were for holding along the offensive line and procedure after Alex Douglas took over under centre.

The penalties took at least seven points off the board, and allowed the Broncos to score their lone touchdown after the Sun were flagged for roughing the kicker on an unsuccessful field goal attempt.

The Sun, 4-1 on the year, will host the Broncos in the Apple Bowl debut next Saturday at 4 p.m.

Capacity for Saturday's opener is set at 2,000. Free tickets for the game at available at each of Skogie's Car Wash two locations.

Fans entering the game will be required to show proof of full vaccination.