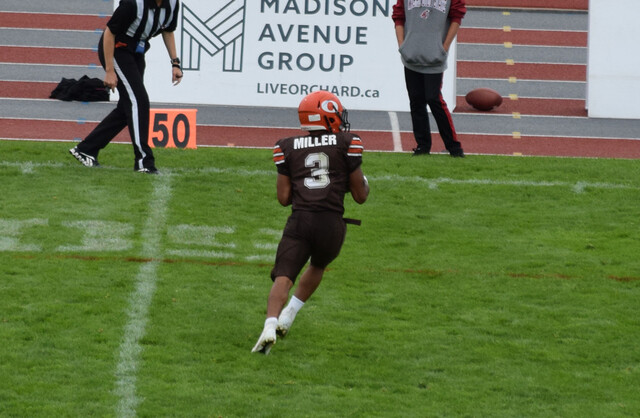 Malcolm Miller literally ran over, around and through the VI Raiders defence Saturday.

According to unofficial league stats, Miller carried the rock 39 times Saturday for a club record 325 yards in a 39-14 thumping of the Raiders in Nanaimo.

If the number stands up, it would break Jeff Halvorson's record of 241 yards set on Oct. 12, 2003 against the Tri-City Bulldogs.

Halvorson also had a 240 yard game that season.

However, the 325 yards would be just the third best ever in BCFC history.

Greg Morris of the Westshore Rebels ran for 405 yards against Kamloops in 2012, while Eric Scott of the Richmond Raiders rambled for 338 yards against Victoria Payless in 1985.

Miller also found the end zone three times, including a 44-yard scamper that put the Sun up 27-7 early in the fourth quarter and put the game out of reach.

Rookie running back Tristen Peddle also found the end zone for the Sun.

The game was scoreless after the opening quarter before the Sun got rolling.

Liam Atwood connected on his first of three field goals to open the scoring early in the second before Peddle hit paydirt with the game's first major.

Atwood also converted all four touchdowns to go with his three field goals. The final two points came on a Raiders conceded safety.

Saturday's game was played just days after the thieves broke into the Raiders equipment trailer and stole thousands of dollars worth of equipment.

Media reports peg the loss of equipment at about $15,000.

Saturday's win improves the Sun to 3-1.

They play in Kamloops next Sunday evening before finally returning home to host the Kamloops Broncos Saturday afternoon, Oct. 9.