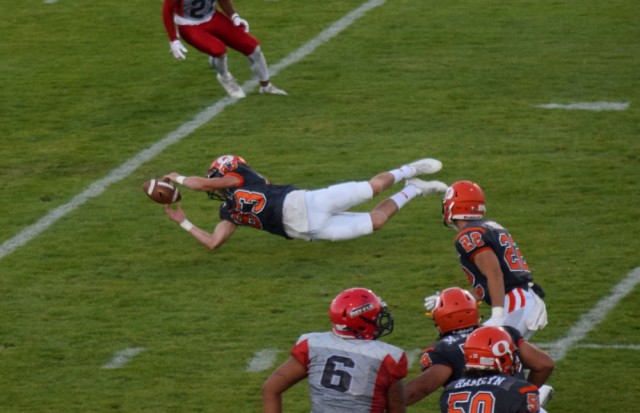 You can call this a gut-check win, because for much of the first half Saturday, it looked like the Okanagan Sun might get blown out of their own building.

Instead, they made some breaks, then took advantage in a thrilling, and at times sloppy, 19-15 win over the reigning BCFC champion Westshore Rebels in the season opener for both teams.

The Rebels looked like they would have their way with a young secondary and an offence trying to find its way.

They built a 14-0 lead 16 minutes in on the strength of a pair of long sideline passes by first year starter Scott Borden. He picked on inexperienced corners for touchdown strikes of 39 yards to speedster Dusan Greenaway nine minutes into the game, and Austin Lindo-Brown a minute into the second quarter.

At the same time, the Sun offence was spinning its wheels. They went two-and-out over their first five possessions for negative seven yards.

The Sun didn't get a first down until the second quarter was 10 minutes old. That came on a Kelton Kouri 18-yard scamper, one play after Cole Klughart blocked a field goal that could have given the Rebels a 17-0 lead.

The Sun turned that block into momentum, and that momentum into points.

Seven plays later, quarterback Keith Zyla surged ahead on third-and-goal from the three to put the Sun on the board.

Second year linebacker Conor Richard said the mood on the bench never changed as the team suffered through its early struggles.

All it takes is one play to get it turned around.

"It's a momentum swing because one play can change everything," he said.

He felt his adrenalin pumping and knows it was the same for the rest of the team.

"One hundred per cent. It just wakes everybody up. We were ready to get fired up and we just needed that spark."

Richard provided another spark moment later when he partially blocked a Rebels punt on their next possession. The Sun took over with great field position and capped off the drive with Kyler Mosley's one-yard run to tie it with 15 seconds left.

The Sun had a chance to take the lead heading into the locker room when they recovered the ensuing short kickoff, but Zyla was intercepted in the end zone on the final play of the half.

Head coach Ben Macauley said he feels there are three to five plays on all three sides of the ball that can turn a game around, and special teams did that Saturday.

"We saw that was an area that doesn't get coached up that much in main camp, we we felt we could take advantage because it's been a strength for us," said Macauley.

"We knew they were slow betting the ball back to kick, so we knew we could block some."

That momentum, and some adjustments the team made after the first quarter, allowed the offence the chance to do enough to get back on even terms.

Richard got the team on track again early in the third quarter when he recovered a fumble deep in Westshore territory. But, Kouri fumbled after an 11-yard gain on the net play at the Rebels eight.

A conceded safety two plays later provided what would be the winning points.

The Rebels got to within one before the end of the quarter when Kyle Clarke's 27-yard field goal try sailed through the end zone after sailing wide left.

Sun kicker Isaac Wegner ended the scoring on the first play of the fourth quarter, nailing a 22-yard field goal of his own.

The Rebels had one last chance to get the lead back, but came up inches short on a third and three from the Sun 15-yard line with less than five minutes to play. It was the first of three straight possessions in which they turned the ball over on downs.

In all, including the two block, the Sun forced seven turnovers in the game, while giving the ball up three times themselves.

Zyla finished the night unofficially 11 for 23 for 179 yards and one interception.

Nathaneal Anderson caught four passes for 76 yards including a 53 yarder he almost turned into a touchdown. Mosley had five catches for 77 yards.

Borden completed 21 of his 40 attempts for 280 yards, two touchdowns and an interception on the final play of the game.

Macauley says the club has a lot of things to work on before facing the Kamloops Broncos next Saturday night at the Apple Bowl.

The Broncos, like the Sun, are 1-0, after pounding the Valley Huskers 41-8 Saturday. The VI Raiders also won their opener, 20-13 in Langley.