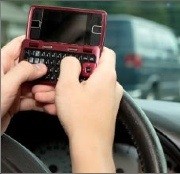 Nearly one in three deaths on BC roads is linked to distracted driving and Mounties hope to cut the carnage by targeting violators throughout February.

BC RCMP Traffic Services has released preliminary figures for 2012 showing 30 per cent of motor vehicle deaths, and 37 per cent of serious injuries involved distracted driving.

Cpl. Robert McDonald says anyone using a handheld device behind the wheel could be handed a $167 ticket.

He says hands-free devices, those operated by a single touch, dare okay, except for drivers in the graduated licence program, who are banned from using any electronics while on the road.

McDonald says distracted drivers could also face an additional charge of driving without due care and attention if they are spotted speeding, making unsafe lane changes or ignoring traffic signals.

The infraction carries a stiff fine of $368 fine plus six penalty points, potentially adding another $300 charge when insurance is renewed.