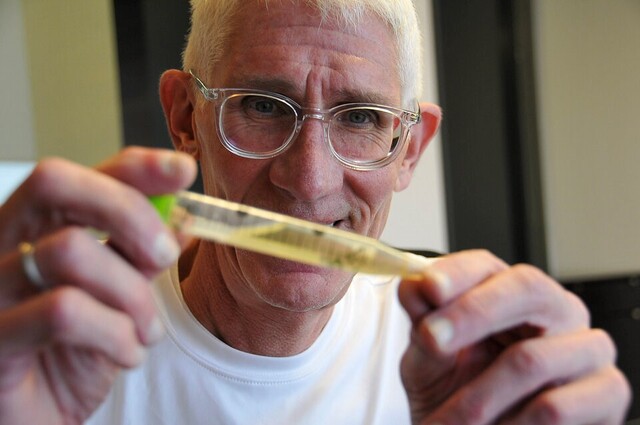 Photo: Stefan Labbe, Glacier Media
Corey Nislow, a cell biologist at the University of British Columbia, holds up a sample of baker's yeast recently returned from 25 days in space aboard the Artemis-1 Orion capsule.

On Dec. 14, 1972, geologist Jack Schmitt packed 110 kilograms of rock into Apollo 17’s lunar lander. Mission Commander Eugene A. Cernan gazed out onto the pockmarked lunar surface and radioed back to mission control in Houston, Texas.

"We leave as we came, and, God willing, we shall return, with peace and hope for all mankind,” said Cernan.

Fifty years later, human beings are finally preparing to step foot on the moon again. In November, NASA’s most powerful rocket ever built blasted off from Cape Canaveral, Florida, launching the Orion spacecraft on a moonshot many hope will mark the start of a new push to explore deep space. 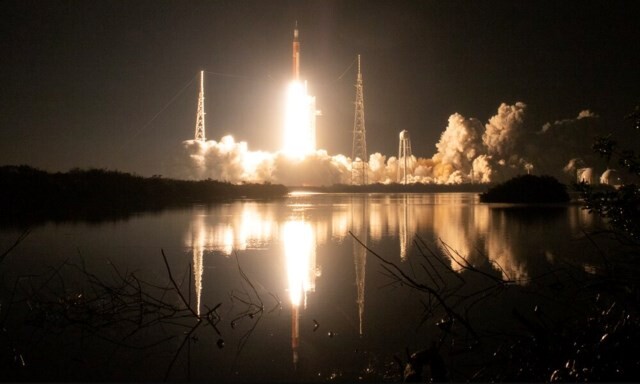 Photo: NASA
NASA's Space Launch System (SLS), the most powerful rocket in the world, carrying the Orion spacecraft launches on the Artemis-1 flight test, Wednesday, Nov. 16, 2022, from the Kennedy Space Center in Florida.

The plan includes putting the first woman and person of colour onto the moon, and building a base on the lunar surface to train for longer missions to Mars and beyond.

There’s just one problem: like the rest of life on Earth, humans have evolved with the magnetic protection produced by the planet's iron core. That magnetic field (known as the magnetosphere) shields life from cosmic radiation — high-energy particles ejected from stars during the fusion process.

Astronauts living on the International Space Station still get that magnetic protection. But leave lower Earth orbit, and that radiation quickly starts to rise to dangerous levels.

Photo: NASA
The Earth and the moon seen from a camera mounted on one of the Orion spacecraft's solar arrays.

Apollo 17, which holds the record as the longest manned mission to the moon, only lasted 12 days. Colonizing the lunar surface and setting off to other celestial bodies would likely require exposure to cosmic radiation for months, if not years.

Such levels of radiation could lead to gruesome results. Neurons are some of the first cells to get damaged. Blood vessels start to leak as micro bleeding spreads throughout the circulatory system. As time goes by, the radiation starts to damage your DNA, leading to blood cancers, tumours, and ultimately, death.

“If you're on the moon for more than six months, you've now exceeded your lifetime dose of radiation,” said Corey Nislow, a cell biologist at the University of British Columbia.

“This is challenge number one.”

On Dec. 11, 2022, Nislow remembers sitting at home watching TV for news of Artemis-1 and furiously texting his colleagues in Durham, North Carolina.

“It hit the upper atmosphere, heated up, then bounced upward,” he said. “So it's like, oh geez, it's just gonna burn up.” 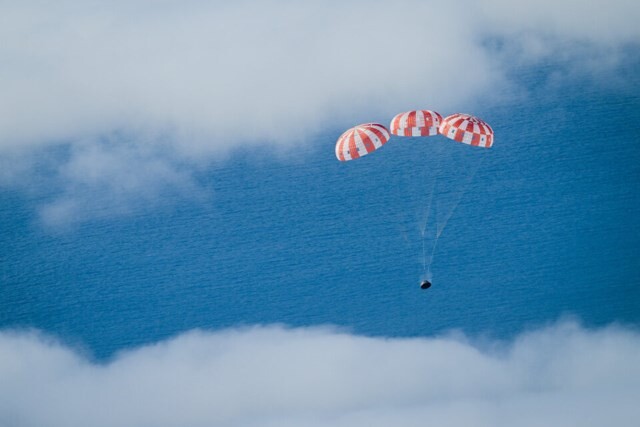 Photo: NASA
NASA's Orion spacecraft for the Artemis-1?mission floats through the clouds off Baja California after re-entry into the Earth's atmosphere.

Nislow had spent years leading a team investigating how to protect people from the deadly effects of cosmic radiation. To do that he has turned to baker's yeast, a key ingredient in bread and beer, and something he likes to describe as the “oldest domesticated organism.”

Baker’s yeast diverged from humans roughly a billion years ago, but its rapid life cycle and genetic makeup make it the perfect stand-in to test interventions to protect humans against cosmic radiation.

“The the mind-blowing thing is that [for] up to 70 per cent of the genes in yeast — if I remove the yeast gene, and I put in a human version, those yeast will thrive,” said Nislow.

In the lead up to the Artemis-1 launch, Nislow and his team devised a payload of 6,000 mutant yeast strains. The researchers packed the yeast into growth bags filled with a liquid medium, and everything was kept warm by small heaters powered by nine-volt batteries.

A second payload, meanwhile, contained chlamydomonas reinhardtii, an oval-shaped, hydrogen-producing algae found all over the world. 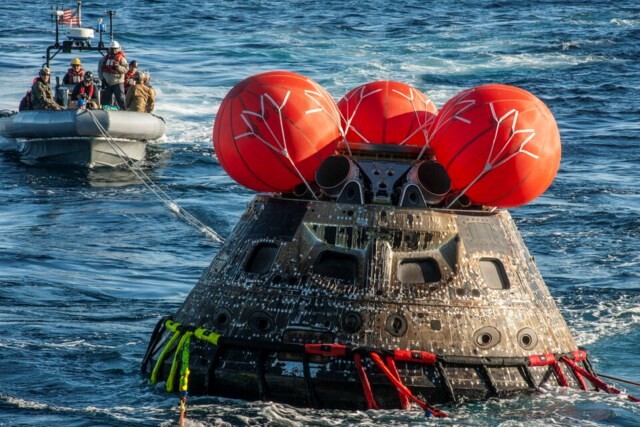 Nislow says he was racked with anxiety after the spacecraft splashed down in the Pacific. The capsule along with the experiments inside had been shipped on a flat-bed truck from San Diego to the Kennedy Space Center.

After getting delayed by a snowstorm, Nislow arrived at NASA’s Cape Canaveral facility to pick up his payloads on Dec. 31.

Inside, billions of yeast cells had exploded across 15 generations, the microgravity turning the medium into a cream colour.

“We knew immediately it worked,” he said, a smile spreading across his face.

Back at the University of British Columbia, Nislow stood in front images of the early universe taken last year by the James Webb Telescope. He wore a white T-shirt with a printout of the Artemitis-1 mission and joked, “My yeast went to the moon and back and all I got was this T-shirt.”

On a table in front of him sat 12 centrifuge tubes, each filled with a yellow suspension containing a billion yeast cells each.

It’s not yet clear which of the 6,000 mutant yeast strains were damaged and which survived the 25 days of cosmic radiation. Nislow and his team still need to sequence the yeast's DNA to detect which have been damaged where.

Next, they plan to introduce a number of countermeasures to help damaged yeast DNA repair itself and act as a test case to develop anti-cosmic radiation treatments for future astronauts.

On the simple end, those treatments could include introducing vitamin C or different acids to absorb free radicals. Others interventions could mean administering a drug that would bolster mutant genes so they can survive a solar onslaught. 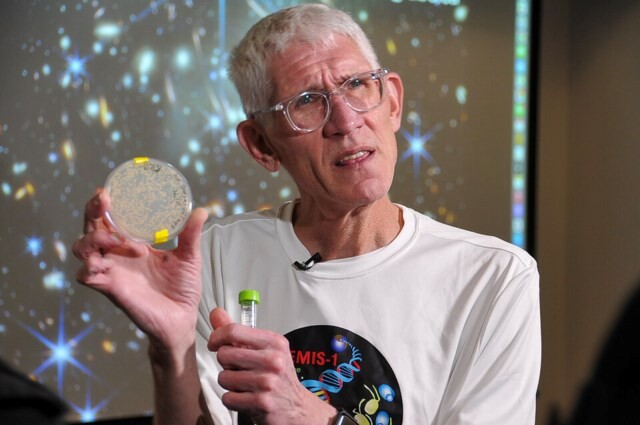 Photo: Stefan Labbe, Glacier Media
Corey Nislow, a researcher in UBC's Faculty of Pharmaceutical Sciences, says it will take decades to work through all the data produced from the Artemis-1 mission.

The mRNA technology pioneered in COVID-19 vaccines already teaches cells how to fight off threats from SAR-CoV-2.

In the case of the cosmic radiation, an mRNA countermeasure could act as a blueprint to ramp up the production of certain repair enzymes, Nislow says.

“Cells already have a hyper-repair system,” he said. “We can sidestep modifying the DNA, inject or deliver RNA to you or me or a crew member. That RNA will make the protein that we want cranked up.”

Unlike gene therapy, the mRNA treatment could easily be turned off.

“We can have it destroy itself after a month, a day, a year. Those are non-permanent changes. It would be no more deleterious than taking an oral medication,” Nislow said.

There are already some treatments doctors give cancer patients to help them heal genes damaged by radiation therapy, and Nislow says his work on protecting future astronauts will inevitably have medical applications on Earth.

Bringing along everything you need

To protect a deep-space astronaut from cosmic radiation means protecting his or her progeny as well. That’s because beyond being deadly, the damage cosmic radiation does to DNA can be passed on to children.

“If we want to go to the next possible habitable planet, we're going to have to have crew members who give birth and their children grow up and give birth on these multi-generational missions,” Nislow said. 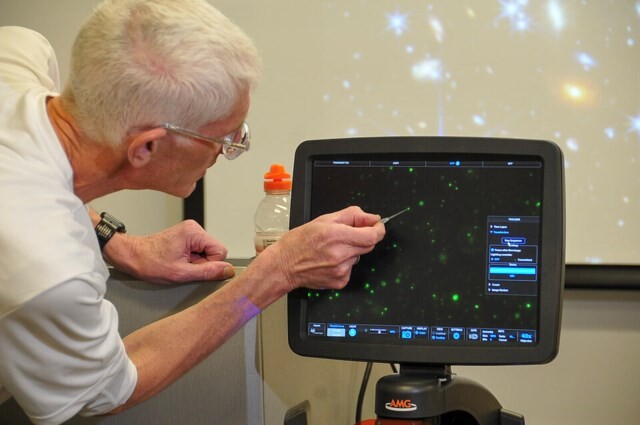 Photo: Stefan Labbe, Glacier Media
Cell biologist Corey Nislow shows a sample of chlamydomonas reinhardtii algae recently returned from a 25-day trip in space to the moon and back. The common algae could serve as a source of food and hydrogen fuel during deep space missions.

Deep-space missions need more than protection from solar radiation, added Nislow, holding up a Petri dish with a colony of algae that only weeks earlier had circled the moon aboard Artemis-1.

The algae absorbs carbon dioxide, can be eaten as a source of carbohydrates and if properly coaxed, could act as a renewable source of hydrogen fuel on long trips.

“Everything that you need is going to have to be on board,” he said.

“That’s decades in the future, but we’re already planning.”