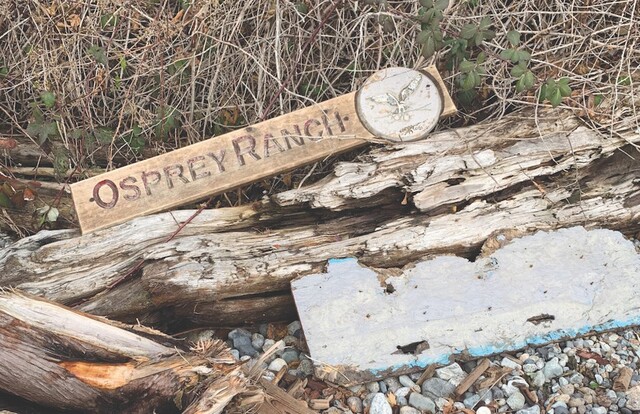 Photo: Peter Milne
Gibsons realtor Peter Milne found a sign that had travelled hundreds of kilometres to arrive on Sunshine Coast shores. Now, it's on its way home.

Sometime, presumably late last year, a sign arrived on the Sunshine Coast. It was from one of the worst-hit areas of the November 2021 atmospheric river environmental disaster. “Osprey Ranch” read the six-foot slab of worn wood, resting on some logs between Bonniebrook and Secret Beach.

Gibsons, B.C. may have been just another stop on the sign’s 350 km (or longer) journey if local realtor Peter Milne hadn’t taken the extraordinary effort of figuring out exactly where the sign was and hauling the water-worn wood back up the steep embankment.

Through persistence, small-town connections and a desire to help, the sign will soon be reunited with its owners at an Interior B.C. property reshaped by the raging Nicola River of November 2021.

A local woman first spotted the sign on the foreshore around New Year’s. Her post on a community forum captured Milne’s eye and sentimental side – he made signs as a boy growing up on a horse ranch.

“I know how much love and attention goes into signs and how much they mean to the owners,” said Milne.

As a boater, Milne also knew that the sign might not be there long. High tides were predicted that week. He worked his way along the difficult-to-access section of log-clogged beach, “It was quite the task,” he said. “Then I was able to separate the backing, which was completely waterlogged particle board, and lug the sign out.”

The detective work to find Osprey Ranch took a bit of Googling, discovering it was in the Spences Bridge area, and remembering that he knew the owners of the Inn at Spences Bridge – he checked in with them and they knew exactly who the sign belonged to.

Osprey Ranch is about 14 km upstream of Spences Bridge on the Nicola River. Geoff Bannoff and his partner, who live in the Lower Mainland, bought the property in 2005 as a hobby farm. The couple learned how to run an orchard (“kind of”), and got to know the town of just under 100 people as of the 2021 census, which Bannoff calls “quite amazing” with “a real sense of community.”

The sign greeted those exiting Highway 8 to cross the 120-foot steel bridge over the Nicola River to access the property. It originated from a visit to a Calgary-area rodeo a year or two after Bannoff and his partner bought the ranch. There was a wood burning shop at the rodeo, “And we thought, hey, why not?” Bannoff’s brother designed the cartoony logo of an osprey carrying a branch with several types of fruit grown on the property.

2021 was a devastating year for the area. In July 2021 it faced the Lytton fire. “We thought we made it through that and then the floods came,” said Bannoff.

When the heavy rains of mid-November 2021 arrived and the Nicola turned into a deadly torrent, the river washed away entire sections of Highway 8 by their property, their irrigation system, and the bridge to access Osprey Ranch, along with the sign.

But, because their property is on the inside curve of a bend in the river, the property was spared from the most disastrous of outcomes. Between Osprey Ranch and the town of Spences Bridge “was where the worst of the worst of everything happened,” said Bannoff.

Just a few kilometres downstream, the river swept away three homes and a woman was killed.

In the days that followed the atmospheric river, the couple thought they’d lost access to their property forever – the bridge, and the road along with it, was gone. (The bridge was found a few kilometres downstream, a mangled mess.)

However, they did get access back about seven months later as the highway was rebuilt just beside Osprey Ranch. Bannoff and his partner allowed the Department of Highways to build a work camp on their farm, “anything to speed the process of getting access back to our neighbours.”

Osprey Ranch got its power back in June, but neighbours just four kilometres downstream just got electricity back last week.

“Life is not back to normal for most people,” said Bannoff. He noted the isolation during the disaster and pointed to the local heroes who stepped up for their neighbours – among them, the town’s only coffee shop, the Packing House, becoming the town’s “living room.”

It’s a small thing amid the destruction, but Bannoff and his partner are grateful that the sign found its way to Milne and Milne knew who to ask to get it home.

As for the future of Osprey Ranch, Bannoff and his partner will continue to support the highways crew. They did some work rebuilding the irrigation system last year but are not sure they can keep the property as a viable farm.

“The last couple of years were pretty difficult.”

“But hopefully we’re able to keep the farm going for another few years.”

As for Milne, he’s just glad to see the sign return home. “Rescuing the sign was a real thing, a passion for me,” he said. “We as a society need to help people more, we need to reach out and help our fellow mankind.”

Milne jokes that he’s going to start a club, combing the beaches for other relics washed ashore as “a positive way of finding people’s lost treasures that might have floated away.”

– With files from Duane Burnett, Sunshine Coast BC Canada on Facebook