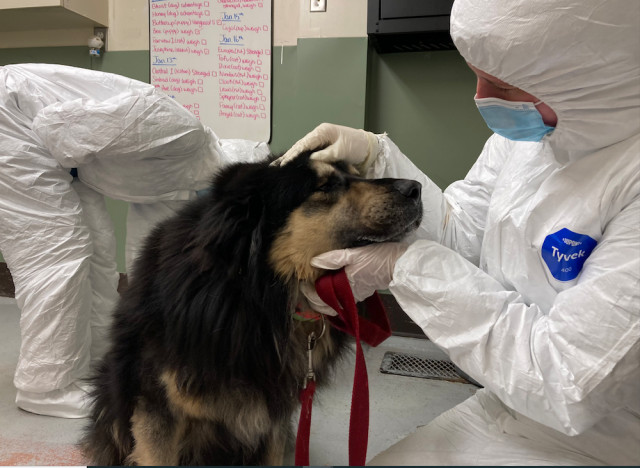 Photo: BC SPCA
One of the 10 rescued dogs getting medical care

Ten malamute huskies have been brought into SPCA care after being rescued from a home north of Fort St. John.

In a news release, the BC SPCA says the dogs were taken from a remote property after their guardian was hospitalized and the dogs left tethered without food or water.

The SCPA says the guardian was later found and contacted in an Edmonton hospital, ”who asked to surrender the animals into SPCA care as he was not sure when he was returning and he had no one else to care for them.”

The dogs are now being cared for in Prince George, the SPCA says.

“The dogs are in good health overall and appear quite friendly,” Eileen Drever, senior officer for protection and stakeholder relations with the provincial agency, said in a statement released Thursday.

“We’re just relieved that we were able to get them off that remote property and somewhere safe and warm where they will receive the on-going care and attention that they need.”

Six of the dogs were flown to Prince George with help from Upper Valley Aviation. The others were transported by vehicle.

“Because of the remoteness of the property and the snowy winter conditions, we had to come up with a creative solution to transport them to Prince George as quickly as possible,” Drever stated.

The SPCA is now seeking public support to care for the dogs. To learn more, visit the agency's website.