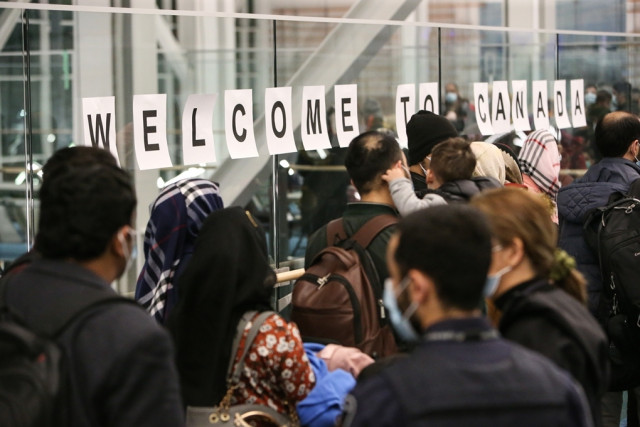 Between July 2020 and July 2022, Metro Vancouver’s population spiked five per cent, up about 139,000 to 2.84 million, largely due to new immigrant arrivals offsetting an exodus of nearly 27,400 existing residents to other parts of the province, namely the Fraser Valley and Vancouver Island.

“You can see the dynamic that’s emerging. So, in metropolitan Vancouver, it’s not necessarily people coming from Alberta or Ontario coming in over the past two years. What it is, is people coming from outside the country — growth is dominated, absolutely dominated by international migration,” said urban planner Andy Yan.

Metro Vancouver’s population growth represented 85 per cent of the province’s total of 163,829 new net residents, in these two years. That's a three per cent increase, which is more than the country’s two per cent increase of 922,736 (bringing Canada's total population to 38.93 million Canadians).

The vast majority of Metro Vancouver’s growth occurred outside of the City of Vancouver proper, which only saw an uptick of 6,741 people — a one per cent growth rate. This indicates people either moved out of the big city to neighbouring municipalities, such as Surrey (five per cent growth rate) or chose the latter options as their preferred landing spot.

“This raises questions about the infrastructure, supports and employment opportunities for these new populations outside of the City of Vancouver,” said Yan.

Metro Vancouver’s pandemic population growth has been buoyed by precisely 93,973 immigrants plus over 13,200 folks from other provinces and nearly 21,000 non-permanent residents, i.e. international students, in this two-year window. The province’s chief urban core — including Vancouver, Burnaby, Richmond, Surrey and the North Shore — had over 46,200 babies born to more than offset the 37,200 deaths, for a net gain in natural growth of 9,061 people.

The Fraser Valley, consisting of the Abbotsford and Mission areas, also saw a small bump in natural population growth (662), as did Squamish (334) and many northern communities, such as Fort St. John (580), Prince George (173) and Terrace (135).

The same could not be said about the rest of the province, with all regions or municipalities of the Okanagan, Southern Interior and Vancouver Island experiencing more deaths than births. Nevertheless, their populations still grew thanks largely to people moving in from outside the province and from within the province (namely Metro Vancouver), as well as smaller boosts from immigrants.

For example, the Victoria region saw 2,411 more deaths than births but gained 5,267 immigrants, 7,484 people from other provinces and 2,481 people from within B.C. It also gained 1,742 new non-permanent residents.

In the Okanagan, the Kelowna region saw 1,026 more deaths than births but gained 2,707 immigrants, 5,825 people from other provinces and 3,528 people from within B.C. It also gained 962 new non-permanent residents.

Similarly, Kamloops alone saw 344 more deaths than births but gained 966 immigrants, 631 people from other provinces and 966 people from within B.C. It also gained 597 new non-permanent residents.

These areas were particularly popular among people moving from another province. Despite Metro Vancouver representing about 56 per cent of the province’s population, it only took in about 30 per cent of “interprovincial migration.” (B.C. gained 41,245 people from other provinces.)

Metro Vancouver’s average age went up, from 41.3 years to 41.5, during this time whereas in rural areas and small cities — falling outside of the major urban cores of the Lower Mainland, Kelowna and Victoria — the average age jumped from 45.6 to 46.

“It goes back to the kind of supports and infrastructure that’s out there for them. The grey flow in and the grey flow out,” said Yan.

Affordable housing, economic opportunity and lifestyle all may be factors for why people are moving, Yan said, although until there’s broad surveys of movers the data only provides speculation.

“Young people tend to come to the bright lights and big cities, but you also have the open skies and open spaces of outside Metro Vancouver to contend with,” said Yan.