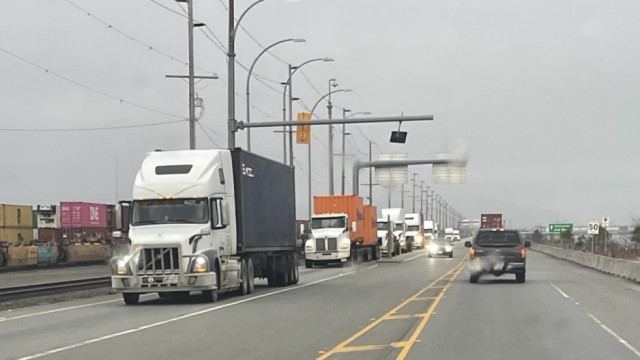 Photo: Dave Pasin.
Trucks stopped Thursday afternoon outside GCT Deltaport after a bomb threat was made to the container terminal. It was determined to be a hoax and operations resumed 11 hours later

A bomb hoax forced evacuation of the GCT Deltaport container terminal on Thursday.

Marko Dekovic, the vice-president of public affairs for GCT Global Container Terminals, said the security incident around 2 p.m. required evacuation and notification of authorities, including the Delta Police Department.

Transport Canada said that it closely monitored the situation for the duration of the event.

“Out of an abundance of caution, a full terminal evacuation was ordered by [GCT],” said spokesperson San Sau Liu. “After the evacuation, the threat was deemed to be non-credible by the Delta Police Department.”

Dekovic said after the all-clear was given, operations resumed for the 1 a.m. shift.

“Making a bomb threat is a criminal offence and Transport Canada takes every threat seriously,” Liu said. “Any actual, attempted, threatened or suspected unlawful act, which would cause an interference, breach or malfunction of the maritime transportation system is immediately investigated further.”

A contractor on-site at the time noticed traffic backed up quickly, but sympathized with the facility’s staff.

“The sense of urgency was palpable, they were getting everybody out of there as fast as they could,” said Dave Pasin. “I was quite impressed with the way they did it. It was clear the welfare of their employees was paramount.”

The semi-automated Deltaport terminal is 85 hectares on Tsawwassen’s Roberts Bank, with access to the CN and CP rail networks and highways. GCT is proposing a fourth berth on the east side of the Roberts Bank Causeway in order to handle two million more containers per year.