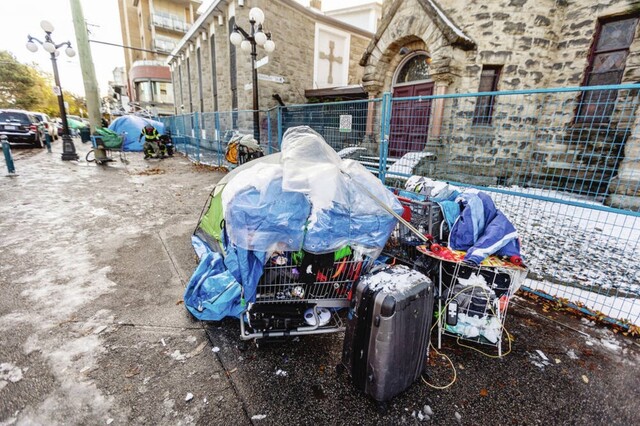 Photo: Darren Stone / Times Colonist
Snow covers tents and belongings on the sidewalk of 900 block of Pandora Avenue. People who are homeless are being affected by the outbreak, Island Health says.

Island Health is warning of a sharp spike in confirmed cases of a rare bacterial disease ­infecting the Island’s homeless population.

There have been eight ­lab-confirmed cases — and one death — of haemophilus influenzae type B in people in their 20s to 70s living in Victoria, ­Nanaimo and Parksville since late 2021. A typical year would see one case at most on the Island.

“This outbreak is ­affecting people experiencing ­homelessness, unstable ­housing, or supportive housing and those using substances including drugs that are inhaled,” Island Health said in a statement.

The average age of those infected is 47.

Known as Hib, the organism is spread asymptomatically through the nose and throat and via coughing or sneezing — close face-to-face contact — or through saliva or spit when people kiss or share food, utensils and drinks. Infection typically starts suddenly with fever, vomiting, lethargy, confusion, headache and stiff neck.

Despite its name, Hib is not a flu and is not easily contracted if a person was immunized against it as a child, which began in 1986.

The health authority ­encourages parents and ­guardians to review their ­children’s vaccination history and to contact their public health unit if they require vaccination.

The B.C. Centre for Disease Control says the disease usually infects children under age 5. Before universal vaccinations began, it was the most common cause of bacterial meningitis in children ages two months to five.

“Hib is now rare in B.C. because of routine childhood vaccination programs,” says the BCCDC website, but “for every 20 children who get sick, one will die.”

Meningitis can present as a progressive stupor or coma and the fatality rate can be as high as five per cent. There’s a 15-20 per cent chance of complications including brain damage and deafness.

Those infected on Vancouver Island presented with meningitis, pneumonia and bacteremia — bacteria in the bloodstream — requiring admission to hospital intensive care units. Antibiotics are given to those infected.

People who are not immunized or whose immunization has waned are the most susceptible.

Health authority outreach nurses as well as doctors and service providers will also offer vaccination to ­at-risk ­communities in Victoria, ­Nanaimo and Parksville.

Island Health has ­notified ­service providers of the outbreak, explaining how to reduce the risk of Hib among ­at-risk communities.

That includes: Hib vaccination (if eligible) as well as immunization for influenza, pneumococcal and COVID-19; not sharing cigarettes and joints or related equipment; and practising ­personal hygiene, including frequent hand washing, sanitizing, showering and wound care.

There is no widespread ­vaccination as a result of the outbreak because the risk to the public is low, according to Island Health.