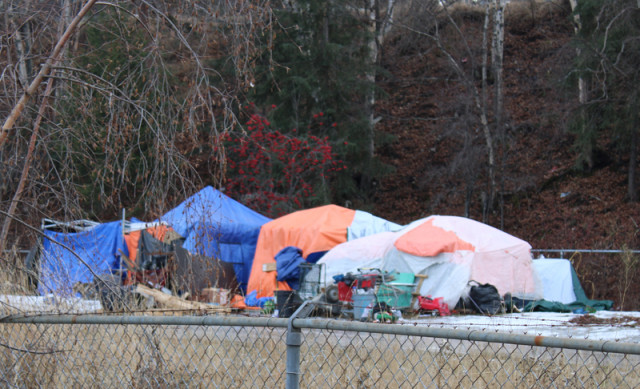 Prince George will be at the centre of a national discussion on human rights and encampments across Canada.

A case study of Prince George and Moccasin Flats, commissioned by the Office of the Federal Housing Advocate Marie-Josee Hooule, was released Friday during a national webinar.

The case study was written by Joseph Hermer, chair of the sociology department at the University of Toronto, who concluded that the actions by the City of Prince George amount to a “gross violation of the principles embedded in international human rights law.”

Prince George is one of three selected case studies presented during the webinar, which focuses on encampments across Canada.

The objective of the discussion is to mobilize knowledge from these research projects to make recommendations to the Federal Housing Advocate.

The case studies look at how regulations of encampments compare with the right to housing and human rights framework as set out in the National Protocol on Homeless Encampments in Canada.

“I take a look specifically at the demolition that occurred on Nov. 17, 2021 but also the general climate around mostly unhoused, mostly Indigenous people in Prince George, including the Safe Streets Bylaw,” explains Hermer.

The bylaw enables bylaw officers to ticket for a number of “nuisance” behaviours like panhandling, using drugs or lying down and obstructing a doorway.

The case study also examines the court battles surrounding the city’s efforts to close the Moccasin Flats encampment on Lower Patricia Boulevard, and how the city inflicted serious harm on vulnerable people when it dismantled structures on Nov. 17, 2021 in violation of an existing court order.

“What I found, in almost every way, is that the city of Prince George violated the humanity and the dignity of the encampment residents, by specifically carrying out forced eviction, and more generally, the way in which the city has chosen to carry out the bylaw.”

Hermer has studied vagrancy laws in England, Scotland, across the United States and specifically looked at municipal bylaws in Canada and said Prince George is one of the worst examples he’s seen of how a city treats its unhoused population.

“I don't think I've ever seen a city that seems to be so determined to do the wrong things,” said Hermer. “There are no perfect solutions or magic bullet, but there are communities who have at least recognized that the solution to the problem is not fundamentally an enforcement one, and they've tried different things.”

Hermer says one of the driving factors to the formation of encampments in the city is the Safe Streets Bylaw.

“If the city had listened to encampment residents, they would know this,” said Hermer.  He explained the bylaw in the daytime make it practically impossible for unhoused people to exist because it is enforced too broadly, and people are continually “moved on” to different places.

“Strangely enough the city has created the circumstances by which the encampments have been viewed to be necessary by unhoused people. It is not about sleeping overnight, it is about their existence in public spaces.”

In March, Hermer and the BC Assembly of First Nations also published two reports, which raised concerns regarding the bylaw.

His research indicated the bylaw is being applied informally in a crude and punitive way that increases the suffering of unsheltered people.

Hermer said that the situation is going to become much worse and the solutions will become more complicated unless drastic action is taken, adding that he thinks Mayor Simon Yu and city council should put forward a resolution that there should be a moratorium on the enforcement of the Safe Streets Bylaw.

“That is the very least you could do to reverse course on a situation that is only going to worsen.”

Hermer said it's important that Prince George is included as a case study in this national discussion, not only because it has been a closely watched case, but also because the city is a northern community with different challenges and needs.

“It's not just about big cities and it is not just about Toronto. It's about people that live in northern rural areas and in some cases, about very vulnerable populations such northern Indigenous unhoused people, to make sure that they're included as part of the analysis.”