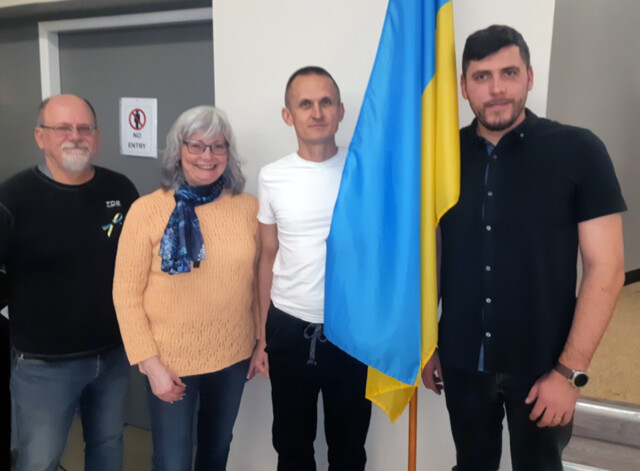 One in four Ukrainians have been displaced from their homes in the nine months since their country was invaded by Russia and just before the conflict began Vasili Derunts and his wife Iryna found refuge in the home of Iryna’s brother in Spain.

“We were very lucky, we left the week before the war started,” said Vasili, 35. “My parents are still in Ukraine and they told me every day they have a lot of trouble with electricity and they have blackouts all the time. Sometimes for 20 hours they don’t have electricity in their town.”

After several weeks in Spain they considered going back home to Vinnysia, in central Ukraine, but their parents told them not to. It was too dangerous. Russians have targeted electrical infrastructure and Ukrainian citizens are being asked to leave countries if they can, to lessen the burden on the electrical system and avoid the hardship of power disruptions during the cold winter months.

The Derunts had a friend living in Canada in a place they’d never heard of and that connection is what brought them to Prince George on May 24, three months after the war started, where they now live with a host family.

“When we came here a lot of Canadian people tried to help us to be more successful and make it easier for our life here and I think it’s a good place,” said Vasili. “We had a chance to go to Edmonton, a much bigger city, and when we came back here we understand, Prince George is a much more beautiful city and it has much more beautiful nature around. We are very happy we came to this city.”

Before the war, Vasili was working as part of the management team for a pharmaceutical company and his wife was a medical doctor working as a pediatric ear, nose and throat specialist. He found work in Prince George as labourer on a commercial construction site and two weeks ago Iryna was hired by Northern Health as a project co-ordinator. She also volunteers as a tutor at UNBC with the Northern Medical Program.

“Right now we’re trying to figure out his she can be a doctor in Canada,” said Vasilli, who came to St. George’s Ukrainian Catholic Church Friday afternoon to speak at a gathering arranged by Prince George Share Hope Refugee Committee.

Many of the 124 Ukrainian refugees who have come to Prince George this year have university degrees. Some are engineers, three are lawyers, but they can’t work at their professions until they are certified by the Canadian organizations that govern their professions.

“There are some impediments, (but) the biggest challenge facing our guests from Ukraine is childcare,” said Prince George For Ukraine volunteer Charles Scott. “They’ve got folks who will help them with money for childcare but they can’t find a spot.  Of course that’s not just Ukrainian parents having that (problem), Canadian parents of young children would put up their hands and say, ‘I feel your pain.’”

On March 2nd, the Share Hope non-profit volunteer organization turned its refugee focus to displaced Ukrainian families and individuals to help them get settled in the city. They arrange for flights, find billet homes for the people, find them jobs, and get them set up with donated clothing, household items, furniture, toys and school supplies. They also offer them financial support, provide language training and help get their medical care and school registration sorted out.

“Lots of people wanted to help but they didn’t know how,” said Scott.

Share Hope has teamed up with the Prince George Yalenka Ukrainian Society, Immigrant and Multicultural Services Society, Prince George Chamber of Commerce, Royal Canadian Legion and the Prince George Community Foundation to organize fundraisers that, combined with the generosity of private donors, have given the group the ability to provide financial help. An anonymous man donated 68 laptop computers that had been updated by a technician. Another donor learned a little girl’s scooter had been stolen from her school in Prince George and met her and her family at Canadian Tire to buy her a replacement scooter and also sent her home with Barbie power wheels car.

Don and Mary Antoshko turned their house in the Hart into a clearing house of donated goods where they stored heaps of clothing, bedding, household furniture and toys people dropped off in their driveway. The owner of KMS Tools downtown store on First Avenue has given permission for Share Hope to use part of a warehouse at 909 First Ave., which is now being used to store the furniture and household goods. All the clothes, bedding and towels that are dropped off are photographed and tagged for display on the Telegram app which allows individuals to select items they need, and they either pick them up themselves or they are delivered.

“We have some very generous people in Prince George,” said Mary Antoshko.

The City of Prince George has donated passes for its public swimming pools and passes to ride public transit. The Family Y of Northern BC gave passes to its gym and a donor provided tickets for the Spirit of the North Festival of Trees have given out free passes. Cobs Bakery is giving baked goods to the Ukrainians. Telus donated $10,000 to pay for SIM cards and cellular phone service.

The Prince George For Ukraine group is already into the spirit of Christmas and wants to give each family an artificial Christmas tree on Saturday, Dec. 10 from 10 a.m.-2 p.m. They do need more donations of trees and decorations to have enough for all the families.

In eight months Share Hope had raised $313,000 and distributed $150,000 of that total to the 124 Ukrainians uprooted by the conflict. Thousands more dollars more have been sent by Prince George people  overseas to the Canadian Red Cross relief effort in Ukraine.

Prince George is now home to 43 Ukrainian refugee families, which includes 64 children under the age of 19 and 44 kids 12-and-under. More are on the way. The group expects 15 more Ukrainians will land in Prince George this month and 27 more are expected before Christmas.

Prince George residents have opened their homes as billet families to give Ukrainians a place to live until they can find more permanent homes. The Mennonite Cultural Centre has also stepped to provide apartments at reduced rates for Ukrainians.

“They’re arriving and they don’t have the money to rent anything right away so until they find jobs they’re staying with families,” said Share Hope housing co-ordinator Eva Gillis. “The hardest thing is to find home for people with large families. I’m looking for a home for a family coming next week and they have with five children.”

The afternoon gathering preceded a service at the church for Holodomor Memorial Day, a famine caused by the Soviet Union and its collectivist farming policies which led to mass starvation that killed millions of Ukrainians in 1932-33.