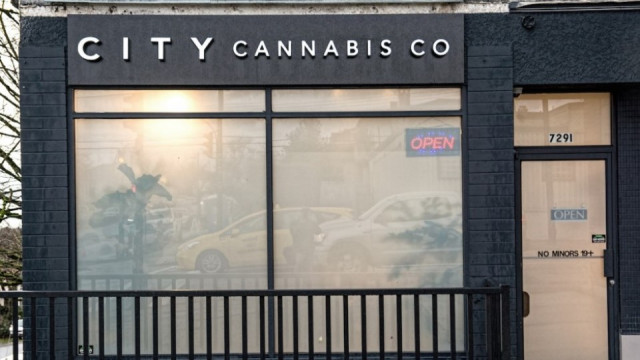 Photo: Chung Chow.
City Cannabis Co. was forced to close some locations in August because the BCGEU strike left it without inventory.

British Columbians shelled out more money on legal cannabis in September than any previous month, Statistics Canada said this week.

The $59,424,000 spent in September was almost 20.8 per cent more than was spent in the same month in 2021. Sales were also up slightly more than half of one per cent, compared with August, which had surprisingly strong cannabis sales.

Much speculation was made in August that the two-week British Columbia General Employees Union (BCGEU) strike that ended Aug. 30 had caused the flow of legal cannabis to slow to a trickle and that consumers might return to buying products from the black market.

Statistics Canada data, however, show that this did not happen. British Columbians spent what had been an all-time monthly record of $59,089,000 on legal cannabis in August, the nation's number cruncher said.

Consumers may have tried to stock up on cannabis products in mid-August by buying whatever legal retailers had on shelves. Many cannabis retailers told BIV in late August that their shelves were nearly bare. The Association of Canadian Cannabis Retailers estimated that about 50 legal cannabis stores were forced to close because they lacked inventory.

B.C. liquor stores suffered widespread product outages in August, but stayed open. British Columbians spent nearly $502.8 million in beer, wine and spirits stores in August, which was 2.2 per cent more than they did in August 2021.

Alcohol sales in those stores then fell month-over-month in September, to nearly $476.2 million – perhaps indicating that some drinkers stocked up in case there was a prolonged BCGEU strike. That September spending, however, was up 7.4 per cent from nearly 443.2 million in the same month in 2021.

Canada-wide, cannabis sales crept up slightly in September, compared with August, to $389,869,000. Those sales remain below the record $392,867,000 spent on cannabis nationwide in July.