Not connected to crime spree 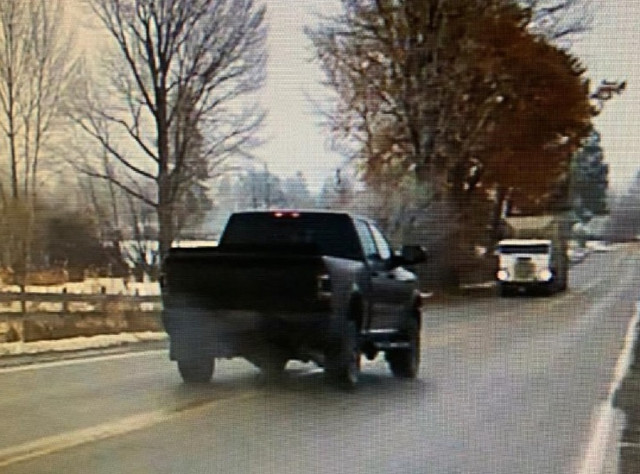 Photo: Merritt RCMP.
B.C. RCMP have confirmed a vehicle stolen out of Coquitlam captured following a police chase on Highway 5 between Merritt and Hope is not connected to the Tri-Cities "crime spree" from Nov. 22, 2022.

Three suspects were arrested on Highway 5 between Merritt and Hope Thursday (Nov. 24) after RCMP received a report they allegedly stole a truck and were believed to be armed.

Police ultimately determined the black Dodge Ram 2500 was stolen out of Coquitlam.

However, Mounties quashed any theories or suggestions the vehicle was linked to Tuesday's (Nov. 22) crime spree through the Tri-Cities, which included a robbery at a Port Coquitlam dealership.

"We are aware of the online speculation on the identities of these suspects," said Sgt. Josh Roda in a news release.

"Although we are in the preliminary stages of the this investigation, there is no indication that these suspects are related to any recent high-profile events in the lower mainland or Merritt."

The Tri-Cities incidents saw an exchange of gunfire in public in the middle of rush hour, a police pursuit along Lougheed and a foot chase on Highway 1 near the King Edward Street overpass that led to an arrest of one of the suspects.

Another carjacked a vehicle and fled eastbound until they were caught in Surrey. Both suspects in custody are known to police, according to Coquitlam RCMP Insp. Darren Carr.

The two remaining suspects are still at large, as of this publication (Nov. 25), and descriptions are still not known as police said they made an effort to conceal their identities such as wearing masks.

Insp. Carr added there's potential that "more than one vehicle" was involved in the offence, and it's important that the case has accurate information.

Merritt RCMP's release, however, didn't provide details about the circumstances around the stolen vehicle, which also had a stolen licence plate from Langley.

Uniform Gang Enforcement officers (UGET), as well as the Combined Forces Special Enforcement Unit of BC (CFSEU), took the Coquihalla Highway suspects into custody after catching them around 6 p.m. on Thursday.

When officers first attempted to pull them over, the driver took off and drove down a side road, but got stuck in the Coldwater River, and the three occupants ran from the scene.

Witnesses reported that one of the suspects appeared to be carrying a firearm, which prompted a large RCMP response, including from the Emergency Response Team (ERT).

A woman suspect was located and arrested soon after fleeing from the truck, but two other men remained at large.

"Out of an abundance of caution, the highway was closed for several hours while we searched the area for these suspects," said Sgt. Roda.

"Without knowing their identities or their intentions, and reports indicating they were armed, we felt it was best to keep all members of the public from the scene."

More than a dozen construction workers at a nearby Trans Mountain pipeline worksite were evacuated, and the entire Coquihalla Highway was closed to motorists.

Following several hours of searching, officers located the remaining two suspects, were "arrested without incident" and transported to the Merritt RCMP detachment.

Spokesperson Sgt. Chris Manseau said he did not know if any firearms were found when the suspects were arrested and it's not clear if any charges have been laid at this time.

- with files from Nicholas Johansen, Castanet