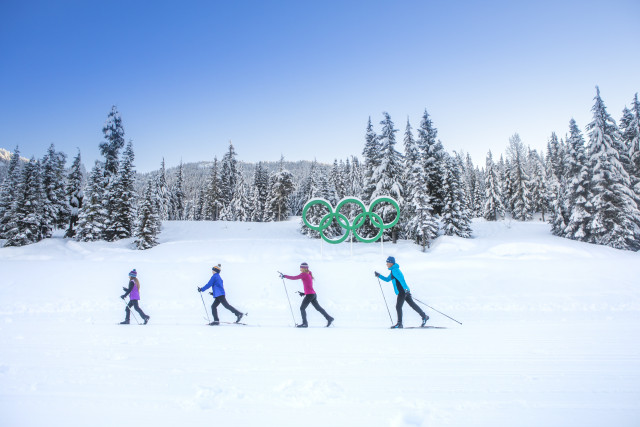 In Monday’s letter, Smith and Fabien reiterated the event’s potential benefits, arguing the Games could serve as a model for reconciliation and as the first climate positive Olympics. They said no Winter Games has ever “relied so little on government investment.”

The bid proposal requested more than $1.2 billion in government funding.

“Know, however, that we are only interested in moving ahead with this project if it makes sense to do so, with the benefits outweighing the costs … To make that determination it requires a full review and dialogue with all parties at the table. A unique project of this nature, led by the potential Host First Nations, deserves a deeper look,” the letter concluded.

In a written statement sent to Pique on Nov. 22, Minister of Tourism Lisa Beare said the NDP cabinet reviewed the 2030 proposal before determining the investment and risks hosting required outweighed potential benefits. Beare said she met virtually with representatives from the host First Nations and the COC on Oct. 24 to communicate that decision.

“We know that this decision is disappointing for everyone that put so much hard work into the bid,” she added, “but supporting the proposal any further would require dedicated and substantial provincial resources across government, while there are many competing priorities and challenges to be addressed.”

Bid stakeholders weren’t the only ones questioning the province’s decision this month.

While discussing the implementation of a new accommodation tax tied to major tourism events, BC Liberal MLAs grilled the NDP government over its decision to introduce that new funding tool two business days after publicly refusing support for, arguably, the pinnacle of international events.

On Oct. 31, B.C.’s Ministry of Finance announced a new Major Events Municipal and Regional District Tax (MRDT) of up to 2.5 per cent on short-term accommodation sales, intended to help communities cover the cost of planning, staging and staging large-scale “international tourism” events.

The new accommodation tax is distinct from the existing MRDT already in effect in more than 60 areas across British Columbia, including Whistler. Communities will be able to apply for the tool through Destination BC.

“This isn’t a new concept,” said B.C. finance minister Selina Robinson in a release. “In 2007, a temporary 4% Resort Area Tax, on top of the existing 2% accommodation tax, was introduced in the Resort Municipality of Whistler to help pay its costs for hosting the 2010 Winter Olympics. We see the potential benefits for other communities that are working to put B.C. on the international stage and bolster our economy.”

This new funding tool comes in direct response to the City of Vancouver’s request to temporarily increase existing MRDT rates to help cover costs associated with FIFA matches in 2026. As one of the 16 North American cities slated to host the next FIFA men’s World Cup, Vancouver is expected to welcome teams—and fans—for five or six matches.

Bill 42 seeks to amend the province’s Provincial Sales Tax Act to include the new MRDT tool. The bill was discussed by the Legislative Assembly’s Committee of the Whole on Tuesday afternoon, Nov. 22 after receiving its second reading on Nov. 2.

“At literally the exact same time that they were drafting Bill 42—a bill to enable extra revenue generation for international events—those same ministers said no to an Indigenous-led Olympic bid, based on potential financial risk, without ever discussing this bill and its revenue potential to those proponents so that they could rework their business plan and show the government how their risk is diminished,” said BC Liberal finance critic Peter Milobar, MLA for Kamloops-North Thompson during the assembly’s Nov. 2 session, later adding, “It defies logic as to why there were not those discussions.”

During a Tuesday, Nov. 22 committee discussion, Robinson maintained the Olympics and the new MRDT “are two completely separate” topics.

She said cabinet could see no business case for hosting the 2030 Games, and maintained the “scope and scale” of the previously-awarded FIFA matches compared to the Winter Olympics and Paralympics “are like night and day.”

While this new MRDT was created specifically with Vancouver and FIFA in mind, it can, however, be used by other communities for other events, Robinson said.

The Major Events MRDT is intended to be “a time-limited, dedicated funding tool” available to communities ahead of big events, but questions still remain about just how many years that timeframe would be limited to, and about what constitutes a major international tourism event in the first place.

Sea to Sky MLA Jordan Sturdy asked whether that definition, for example, could be extended to “every day in Whistler?”

The resort “sees 50,000 visitors on any given day in both summer and winter,” and “generates $1.44 billion in consumer spending every year,” he told colleagues on Nov. 2. “I would argue that that’s a pretty major event. It generates $500 million in tax revenue. You’d say to yourself, ‘Well, it should have plenty of tax revenue,’ except that isn’t tax revenue that goes to the municipality, unfortunately, or fortunately. It comes to the province.”

Though Sturdy said he supports the concept of the bill, he expressed concern that there wouldn’t be enough time to clarify its terms before the Legislative Assembly’s fall session wraps up on Nov. 24.

The new MRDT tool is the latest of several mechanisms the province has at its disposal to help fund events in B.C.

On Nov. 10, the province named nearly 100 organizations that will together receive $4,808,467 in funding through B.C.’s Tourism Events Program (TEP), representing the program’s return after a two-year pandemic-induced hiatus.

Among the list were five major sporting and culture events slated to take place in Whistler in the coming months.

In a statement, a spokesperson for the Black Tusk Nordic Events Society said the FIS Nordic Junior/U23 World Nordic Ski Championships’ organizing committee is “really excited” to welcome more than 500 athletes from almost 40 countries to Whistler Olympic Park from Jan. 27 to Feb. 5.

“In addition to the affordable admission price to the event ($5 daily spectator ticket or a pass for the duration of the event $25), this event will be livestreamed and actively broadcasted on television across Europe,” the spokesperson added.

“Black Tusk Nordic Events Society has worked really hard with every source of funding available, including the provincial and federal governments, the private sector and many generous donors and the $100,000 received from the Tourism Event Program makes an important contribution to the event’s $3 million total budget.”