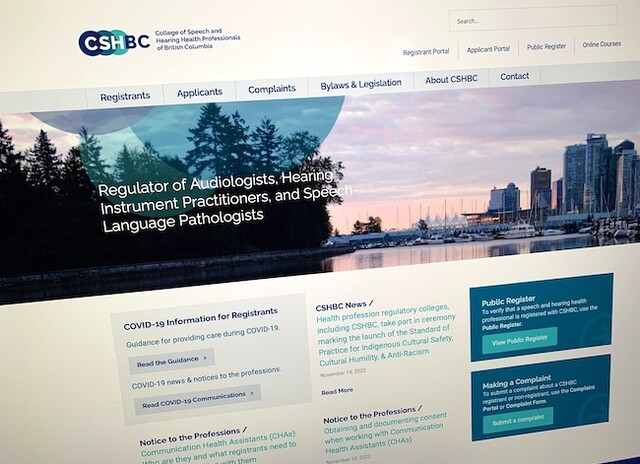 A group representing speech-language pathologists and audiologists in B.C. is calling on the province to step in as people in long-term care homes face “a dangerous gap in services.”

“We are calling on the Ministry of Health to establish a presence of speech-language pathologists in long-term care to better support the health and well-being of its residents,” said SHBC president Becca Yu in a written statement.

“In-house services would help our parents and grandparents access the treatments they need to ensure their quality of life.”

Speech-language pathologists evaluate and treat and broad range of delays and disorders, from managing a stutter or lisp, to helping people learn to swallow.

In young children, the professionals might help with delayed speech, phonetics, reading comprehension and writing. They also work with people recovering from a traumatic brain injury, and manage communication and swallowing disorders brought on by dementia, according to the national non-profit Speech-Language and Audiology Canada.

Speech-language pathologist Sarah Jane Garland works in Kelowna General Hospital with a number of patients coping with the after effects of a traumatic brain injury or stroke.

But once a patient gets discharged to a long-term care home, support to help them communicate gets cut off and occupational therapists and dietitians are left trying to fill the gap, said Garland, who also acts as the director of adult services for SHBC.

“They’re having a hard time getting to those patients,” she said. “They’re just guessing what they want or need.”

In other words, said Garland, “We’ll teach them ways to eat safer.”

Experts like Garland can also help establish alternative communications — such as a picture-based app on an iPad — to help long-term care residents navigate the system.

Without those services, patients risk falling into a spiral of isolation and increased hospital visits. In the worst case, they could choke to death, Garland said.

In an online petition launched Wednesday, SHBC says there is “significant lack of funding” to help people in long-term care access such professional help.

Part of the problem is a lack of qualified professionals. SHBC represents more than 1,200 professionals in B.C., giving the province the second lowest number of speech-language pathologists per capita in Canada.

The group requested a meeting with the Ministry of Health to address the funding gap in August 2022. Three months later, they say they haven't received a response.

The ministry did not respond to Glacier Media's request for comment by publication time.