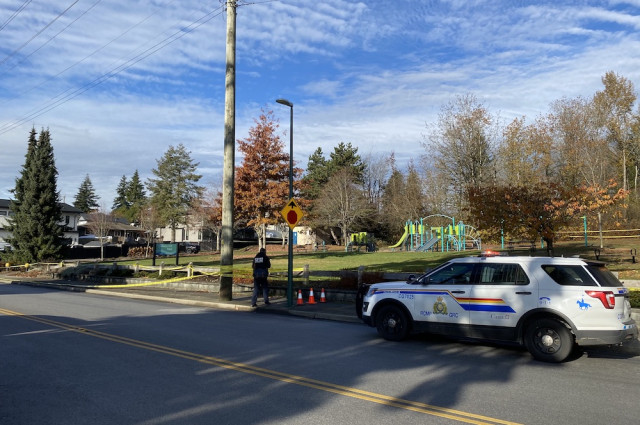 Photo: Diane Strandberg.
A member of the Integrated Homicide Investigation Team on scene at Dawes Hill Park in Coquitlam Nov. 24, 2022.

A Coquitlam park and playground was behind police tape Thursday, Nov. 24 as members of the Integrated Homicide Investigation Team combed the area for clues to Wednesday night's double homicide.

At a police briefing Thursday, IHIT confirmed that one man has been identified as a victim in the shooting, which took place in a lane beside Dawes Hill Park, while efforts are being made to identify a second deceased victim.

In all, three individuals were shot inside a vehicle, but one survived with non-life-threatening gunshot wounds.

Investigators have identified one of the victims as 25-year-old Ramin Salam of Coquitlam.

IHIT took over the investigation and continues to work closely in partnership with the Coquitlam RCMP, the BC Coroners Service and the RCMP Integrated Forensic Identification Section (IFIS), according to the press release.

Coquitlam RCMP officers responded to the scene at 7:45 p.m. on Wednesday, (Nov. 23) after receiving multiple 911 calls about a possible shooting.

They found found shell casings and two unresponsive people suffering from gunshot wounds inside a vehicle. One victim was pronounced dead at the scene, and the other succumbed to injuries later in hospital.

A third victim was found suffering from a non-life-threatening gunshot wound and was taken to hospital.

In an incident captured on video and posted to YouTube a man driving a truck was stopped by police, but was later released as unrelated to the case, according to Pierotti in an email to the Tri-City News.

The shooting came as a shock to the quiet southwest Coquitlam neighbourhood where multiple shots were fired at vehicles in a lane behind Mundy Street at the intersection with Dawes Hill Road.

Neighbours in the area reported hearing gunshots around 7:45 p.m. before a white Mercedes-Benz SUV crashed into a hydro pole in the alley behind Mundy Street near the Dawes Hill Park playground.

“They have the whole place shot up,” said resident Jack Yeung, who arrived home shortly afterwards.

Yeung posted a video on YouTube that showed RCMP officers arresting a man who arrived on the scene in a truck.

The Integrated Homicide Investigation Team was subsequently called to work in partnership with Coquitlam RCMP.