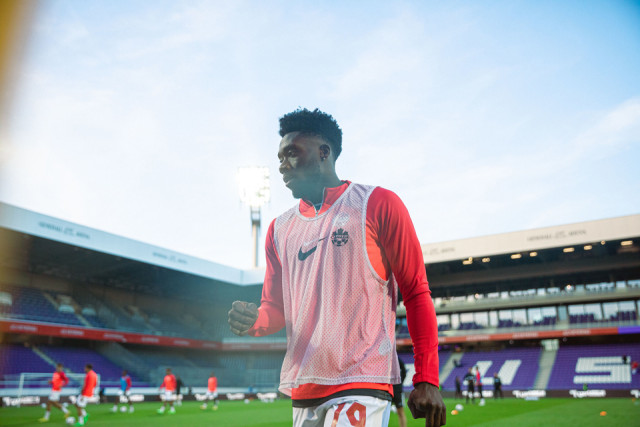 Alphonso Davies may be an international soccer star playing on the world’s biggest stage, but there was a time when he walked the halls of a Burnaby high school just like any other local student.

Davies, 22, took to the pitch in Canada’s first match at the World Cup in Qatar Tuesday.

It’s only the second time the Canadian men’s soccer team has qualified for the tournament, and Davies is credited with playing a leading role in getting it there.

The story of his inspirational rise to international soccer stardom is well known.

Born in Ghana in a refugee camp, Davies and his family came to Canada as refugees.

A free kids soccer program in Edmonton then launched his meteoric journey in that sport.

Burnaby got to catch a glimpse of that journey when Davies joined the Whitecaps FC residency program in 2015 at the tender age of 14.

Under a partnership between the Whitecaps and the Burnaby school district, players in that program attended Burnaby Central Secondary School, and Davies was a student at the school between 2015 and 2017.

“He was always positive, always looking to help other kids,” Central athletic director Andrew Vagnarelli told the NOW. “Obviously, in high school, you’re going to have some kids who are maybe sometimes disruptive; even your good athletes are not immune from that, but he was never like that.”

The program at Central provided blocks and academic credit for training sessions as well as schedule flexibility to accommodate travel for games.

Because of his Whitecaps commitments, Davies wasn’t able to join school teams or even take P.E. classes, but students and staff caught glimpses his athleticism and signature speed when he popped into the occasional gym class or joined in Terry Fox runs, according to Vagnarelli.

He remembers Davies among the top finishers at one of the three-kilometre Terry Fox events.

“I think he barely broke a sweat on that one,” Vagnarelli said.

When Davies joined the Whitecaps men’s team at age 15 in 2016 – becoming the youngest player and then the youngest goal scorer in the league’s history – he was a professional athlete on the weekends and a Burnaby Central student during the week.

But the success never seemed to go to his head, according to Vagnarelli.

“He really never changed,” he said.

The same would hold true when Davies was signed by one of the best professional teams in Europe, Bayern Munich in the German Bundesliga.

“I remember it was big news, but I remember there wasn’t much change out of him,” Vagnarelli said. “He signed with one of the biggest clubs in Europe and then again was just regular Alphonso at that point.”

Burnaby Central is proud to have been a part of Davies’ journey to soccer stardom, according to the school’s athletic director, and his time at the school has earned soccer a “whole whack of new fans" there.

But Davies' success has also inspired other students to pursue their own dreams, according to Vagnarelli.

“It motivates all the other kids when they can see someone who was just walking around the halls like them now accomplish something by playing for your country, signing for one of the biggest clubs and now playing against the whole world,” he said.

Many at Burnaby Central have followed Davies’ career closely, according to Vagnarelli, and they’ll be cheering him and Team Canada on every step of the way in Qatar.

“We’re all behind him; you can let him know that,” Vagnarelli said.