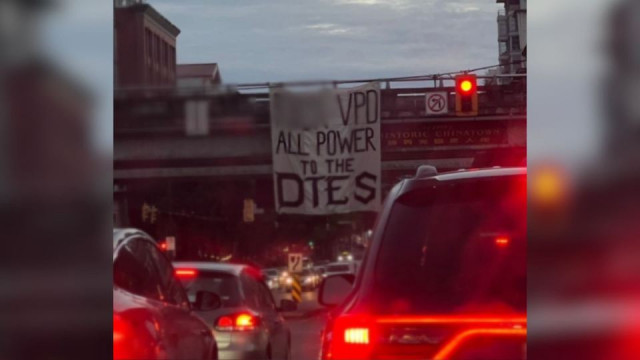 A controversial sign hanging off a major Vancouver bridge has sparked a discussion about the city's police force and the Downtown Eastside.

Friday evening, commuters who travelled under a major Vancouver thoroughfare saw an eye-catching banner hanging off one of its railings.

The sign read: "[Expletive] the VPD all power to the Downtown Eastside" in all capital lettering.

Several people who travelled under the Georgia viaduct shared images of the bold banner on social media. Many of them said they supported its message, while others were against it.

But some locals were unclear about what the banner's message meant.

In addition to several heated debates on Twitter, a thread on the Reddit Vancouver page has just shy of 400 comments since it was posted to the social media platform Friday.

One individual on Twitter shared an "edited" version of the banner, which sparked another impassioned conversation. Some people felt the edit targeted people who were unhoused or unemployed.

Calls to defund or re-envision the city's police force have increased in recent years, but the rise in stranger assaults has also prompted calls for increased policing.

Vancouver has seen a concerning number of stranger attacks over the past couple of years, with recent data showing an average of four assaults daily. A memo from the VPD to city council identified random stranger attacks as a "crime trend" and “issue of note” for politicians to consider. Many have involved weapons, including machetes and knives.

But Benjamin Perrin, a professor at the University of British Columbia Peter A. Allard School of Law, told V.I.A. that there is a massive epidemic in Canada regarding the use of police force, including the death of individuals who are in mental health distress.

Also known as "conducted energy weapons," tasers have been fatal in numerous mental health calls across the country. The Canadian Mental Health Association has long advocated for better support for people in crisis, citing the "propensity of law enforcement officials to deploy them on people experiencing a mental health crisis."

An article in the Journal for the Study of Race, Nation and Culture from the University of Alberta outlines how tasers are used disproportionately against those experiencing mental health crises, with substance abuse issues, who are poor, and people of colour.