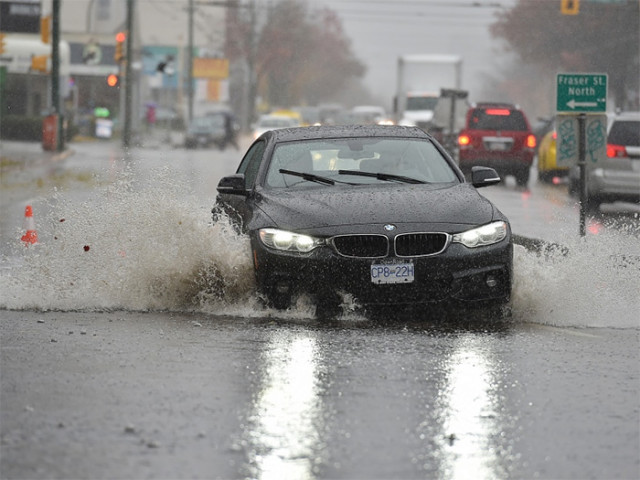 Photo: .
Heavy rain over the weekend could lead to pooling and localized flooding in some areas, says one Environment Canada meteorologist. Photo Dan Toulgoet

Environment Canada issued a special weather statement Friday morning as an atmospheric river is expected to bring “heavy rainfall and strong winds” to British Columbia’s south coast and Vancouver Island over the weekend.

The national weather service said “rainfall warnings are likely to be issued as the event nears.” Mild temperatures are also expected to raise snow lines across much of the region, meaning precipitation is forecast to fall as rain on many highway passes.

“But there’s still a fair amount of uncertainty around how much rain we’ll get.”

Charbonneau said the rain and and strong southeast winds are expected to start Saturday evening and continue through Sunday.

The special weather statement also covers all of Vancouver Island, as well as the central and south coast regions of the province.

The Weather Network forecasts heavy rains through Saturday and Sunday could bring up to 140 millimetres of precipitation to Vancouver, Burnaby and the North Shore. In parts of Coquitlam, rainfall totals could reach 200 millimetres over the two days.

Surrey, Delta and Richmond are expected to see up to 100 millimetres, while no more than 45 millimetres are forecast to fall on Victoria.

The weekend wet and windy weather comes only days after another storm system knocked out power for roughly 100,000 BC Hydro customers Thursday.

The utility says many of those customers have had their power restored, while some people in northern B.C. and the central Interior spent Thursday night without electricity “due to extensive damage and remote access.”

As of Friday morning, nearly all of the damage was fixed and 99 per cent of customers had their electricity restored.

“Crews have been working around the clock to restore power, replacing dozens of spans of power line as well power poles, transformers and cross-arms,” said BC Hydro in a statement early Friday.

Atmospheric rivers are not an unusual phenomenon. Throughout the winter, the long ribbons of water vapour regularly funnel warm, subtropical air from lower latitudes to B.C.'s coast. Moving with the weather, atmospheric rivers stretch thousands of kilometres and carry moisture “equivalent to the average flow of water at the mouth of the Mississippi River," according to the U.S. National Oceanic and Atmospheric Administration.

Just because atmospheric rivers are common does not mean they can’t be dangerous.

Last November, a series of intense and unrelenting atmospheric rivers dumped vast quantities of rain on B.C.’s south coast. The resulting floods displaced at least 17,000 people. Many were trapped, cut off, and in some cases killed, after debris torrents wiped out highways. Meanwhile, hundreds of thousands of farm animals drowned in the chaos.

Over the space of 48 hours, at least 20 rainfall records fell across B.C.

Between Nov. 14 and 15, 2021, over 277 millimetres of rain fell in Hope; this weekend, the community on the banks of the Fraser River is forecast to see up to 90 millimetres of precipitation.

“Obviously, we haven’t had that this year,” she said. “This is likely to bring heavy rain and some gusty winds, but it is not looking like last November.”

Scientists say the flooding that hit B.C. in 2021 is just the beginning.

And in a study published last year, found parts of southern B.C. could see four times as many landslides between now and 2080 — a 300 per cent increase.

"Back in 2009, we had believed that climate change would have a quite modest effect on landsliding — maybe an increase landslide frequency of 10 per cent or so," said author Matthias Jakob, a professional geoscientist and UBC adjunct professor, at the time.

At the high end, Jakob said the province could see future storms bringing 500 millimetres over 48 hours, more than double the rainfall that paralyzed B.C. in the first extreme rainfall event.

“Atmospherically, it's possible. It's not out of the question,” said Jakob. “The sky's the limit for one of these superstorms.”

Shortly after the floods peaked, an Environment Canada scientist working on an atmospheric river early warning system told Glacier Media his team was preparing to speed up its release.

Building on a U.S. system currently in use, the Canadian version would combine historic rainfall and current forecasting technology to develop local warnings in the lead-up to an extreme event.

But a little over a week later, a spokesperson for Environment Canada walked back those assurances, stating the ranking system wouldn't be ready for “some years.”

Most British Columbians not prepared

B.C. has already seen an increase in the average number of storms in a given year. In 2014, there were 52 storms across the province, but in the last few years, B.C. has averaged 117.

Other climate extremes are also paving the way for storm damage. Last summer, a record heat wave weakened many trees across the province in the lead-up to the fall storm season; this year, an extended drought has led to a similar effect, warned BC Hydro.

Despite rising threats due to climate change, most urban British Columbians are “overconfident and underprepared” to cope with a storm’s fallout, according to BC Hydro survey released last year ahead of the November floods.

The poll found more than half of British Columbians don't have an emergency kit. Among the least prepared are Metro Vancouver residents, the province's biggest urban area.

“There’s definitely an under-preparedness throughout Canada, not just in B.C.,” said Ryan Reynolds, a University of British Columbia researcher in the School of Regional and Community Planning, at the time.

Following a 2018 tsunami scare in Port Alberni, Reynolds and colleague Alexa Tanner carried out research in the community. They looked at how residents responded over the long-term.

Reynolds says he documented some people “waking up,” while others created a new baseline for what level of risk they tolerate. In other words, they were more likely to treat a false warning as a let down, shrug it off and say, “Well, it didn’t happen to me.”

“We tend to forget that experience and, as a result, we undervalue risk,” Reynolds said.

How should British Columbians prepare for potential flooding?

While this weekend’s weather isn’t expected to produce severe flooding, preparing for such extreme events takes time and is best planned well ahead of time, say experts.

Like any extreme weather event, experts recommend paying close attention to Environment Canada weather alerts, to carry an emergency kit in the car and avoid unnecessary travel. If one lives in a flood-prone area, be ready to evacuate.

One of the first steps you can take is to “storm-proof” your home, according to an Emergency Management BC (EMBC) guide on how to prepare for a flood. By cleaning out your gutters and drains, they are less likely to back up into your property and into your home if the rain doesn’t let up.

Flooding is the costliest climate-related disaster in Canada. A flooded house can sustain an average of $43,000 in damages, according to Joanna Eyquem, a managing director at the University of Waterloo’s Intact Centre on Climate Adaptation.

“There’s a lot of concerns about the costs of adaptation,” she says. “But there’s also the cost of not adapting.”

Consider this: for each dollar spent on adaptation, experts say you'll get a $3 to $7 reduction in damage down the line. The further into the future you go, the worse climate impacts get and the more you save.

Last year, the Intact Centre released its own comprehensive short and long guide on how to protect your home from a flood. Clean out your backwater valve, check your sump pump and remove debris from the nearest storm drain, ditch or culvert, recommends the guide. After all, they can all be done at no extra cost.

For under $250, consider installing window well covers, extending your downspouts away from the house’s foundation and storing your valuables in watertight containers.

If you're more serious and have more money to spend, the guide recommends installing a backup sump pump and battery.

“There are simple things we can all do,” says Eyquem. “I’m not saying it’s a panacea. If you have water up to your first floor, it’s coming in your door, it won’t save you.”

But, she adds, it might save you a lot of money in a minor flood event.

Some other home improvement recommendations from EMBC include:


While Eyquem stresses that all governments need to be held accountable for their duties to protect residents, they are not the only ones with responsibilities in a disaster.

“There’s a role for everybody,” she says. “It’s a whole society approach.”

When it comes to power outages, BC Hydro recommends reviewing its “outage checklist,” which walks residents through developing a preparedness plan, building an emergency kit and advice on what to do during and after an outage.

Some municipalities in B.C. have encouraged residents to download the Alertable app (available for both Apple and Android users), which provides location-specific warnings. It includes everything from road closures due to flooding and landslides to incoming extreme weather, major fires and hazardous material spills.