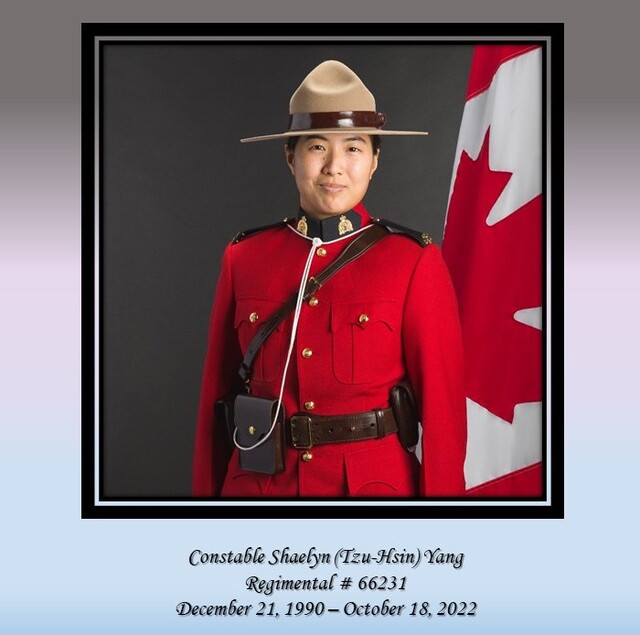 Supervisors for a 31-year-old RCMP officer killed in Burnaby, B.C., say she was "kind and compassionate."

McDonald says the officer was stabbed to death while she partnered with a bylaw officer at a homeless camp site.

He says a suspect was shot and injured and remains in hospital.

Yang had been with the RCMP just three years, working as a mental health outreach officer, and McDonald says she was a loving wife, daughter and sister.

An RCMP officer in Burnaby, B.C., has been stabbed to death in what Solicitor General Mike Farnworth calls a terrible tragedy.

Farnworth said Tuesday the female officer "sacrificed her life in the course of duty," but he had no other details about her death.

Several media reports say the officer was killed while assisting a bylaw officer at a homeless camp consisting of a single tent.

A visibly shaken Farnworth said thousands of police officers go about their jobs every day and to hear this is the worst news.

“This is absolutely a tragic and horrific situation,” he said.

He expressed sincere condolences to all police officers in B.C.

“All of us in this legislature understand and know the dangerous job police officers do day in, day out, on our behalf.”

Burnaby Mayor Mike Hurley said in a statement that they are devastated to hear of the death of the officer.

"Our thoughts are with her family, friends, fellow RCMP members and civilian staff during this terrible time. I know our city staff and the community will also feel this deeply — please seek support if needed. We will continue to work closely with the RCMP to provide all the support we can."

"Our officers worked closely with her and she will be deeply missed," the statement said.

Federal Public Safety Minister Marco Mendicino said he was devastated by the news of the loss of the officer in the line of duty.

"At this difficult time, my heart goes out to the family and friends of the deceased officer and to the entire Burnaby RCMP Detachment," he said in a tweet.

Police departments from Vancouver to Ottawa also expressed their sadness at the loss on social media.

The Independent Investigations Office of B.C. has confirmed it has been deployed to an incident involving police in Burnaby, but it would not confirm the stabbing or whether it involved RCMP.

The office investigates any incidents linked to police in B.C. involving serious harm or death. 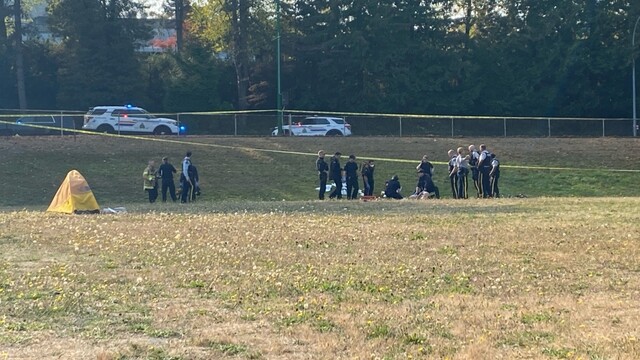