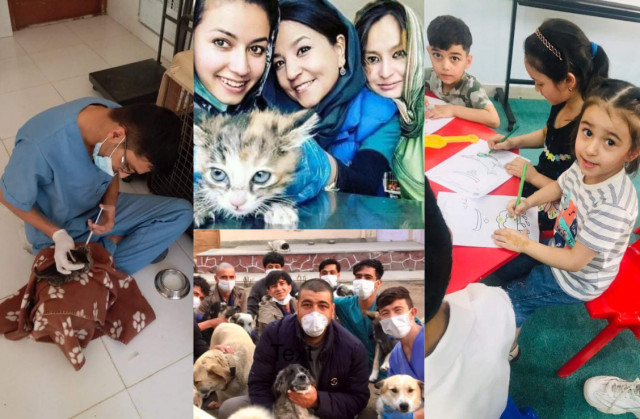 Photo: .
Some of the vetrinarians and Kabul Small Animal Rescue staff seeking refuge in North America.

After helping hundreds of dogs and cats make their way to Canada and the USA, staff from an animal rescue in Kabul, Afghanistan are looking to follow in their paw steps as they face persecution, beatings and potentially death in their home country.

In Vancouver, a group of animal lovers are raising tens of thousands of dollars to make that happen.

At the beginning of 2022, 286 cats and dogs escaped Afghanistan, landing in Vancouver on February 1 after an international effort.

The animals were a mix of pets and strays that were cared for by the Kabul Small Animal Rescue (KSAR), an animal rescue organization in the country's capital.

Many pets were left behind when families fled as the Taliban took over the city in the summer of 2021, leaving them with friends and family who remained. KSAR connected with animal rescue organizations in North America to reunite many of those pets with their families.

At the same time, other cats and dogs were sent to Canada to find a better life after having lived on the streets of Kabul.

Now there's an international group, including several Canadians, looking to help them make their way to Canada and the U.S. safely and legally, which may see several refugees end up in Vancouver.

The situation is dire for those who stayed, and their families, says Owen Laukkanen, who worked as the shelter manager in Vancouver for the flight full of pets.

"Importantly, the members who are still in Afghanistan have been targeted by the Taliban," he says. "Many of them have stories of being beaten."

On the August long weekend, Dr. Mohammed Iqbal was stabbed to death in the streets of Kabul.

While his death hasn't been officially connected to the Taliban, those involved with KSAR believe he was targeted for his work with the organization.

"It's highly likely that it was in response to his actions and connections with the work with the animals," Laukkanen adds.

He explains there are several reasons those who worked with KSAR are being targeted with violence and intimidation.

The most direct reason is the fact KSAR is an NGO connected with western countries like Canada and the United States. That connection alone, he says, puts targets on KSAR staff and their families.

On top of that, many of the people working with KSAR are educated women; the Taliban have a long and brutal history when it comes to women's rights, and they've returned to those practices.

There are also many staff members who are Hazara, an ethnic minority in Afghanistan discriminated against by the Taliban. When the Taliban were pushed out of power in 2001, many Hazara communities allied with the international force that arrived.

The situation has become urgent. In all, Laukkanen says around 170 staff and family members are part of the group seeking refuge outside of Afghanistan.

The group organizing the refugees aren't immigration specialists, they're animal rescue organizations for the most part. A woman in Long Island, New York who runs a dog shelter has been quarterbacking the operation, with significant help from seven volunteers in Vancouver, including Laukkanen and Legere. They've taken to learning about the refugee system in Canada and started working with immigration specialists.

While Vancouver, and Canada in general, are a likely final destination for many of the KSAR team, the group is first focusing on getting people out of Afghanistan to a third country legally.

"We're trying to buy them time some so that the Western governments can slowly process their applications," says Laukkannen.

He notes that about 130 are in a third country currently, but the situation is unstable, as it costs about $20,000 to keep the group housed and fed.

"If that $20,000 per month dries up and the money disappears, then these people will be deported back to Afghanistan," he says."The Taliban has made it known members of the group who return will suffer the consequences."

There have been concrete threats that they would have a hand cut off, Laukkanen adds.

The whole process is expected to cost around $600,000 to do legally in the end, an amount dog shelters run by volunteers don't have on hand.

"It's a constant battle to raise and maintain this amount of money," says Laukkanen.

So far the Vancouver group has raised between $25,000 and $30,000. Laukkanen notes that Paws Unite People, the Long Island shelter, has been at the forefront of the effort, but has tapped out its resources.

In Vancouver, there are a variety of fundraising plans. A ticketed in-person auction at the Irish Heather has sold out. At the same time, there's an online auction being run with many locally made and donated items, ranging from books to BC Lions tickets to custom cakes and luxury vacation packages.

"It's all from local merchants, local creators, and so there's dog training, ballet lessons, a will preparation kit," says Laukkanen. "There's something for everyone."

Notably, there's a bespoke dining experience with an Afghani chef who'll cook a three-course meal for four at his house as an interactive cooking experience.

There are other campaigns as well, under the Mission Possible 2: Rescue the Rescuers moniker (the flight of the pets was dubbed Mission Possible). Paws Unite People is selling shirts with all proceeds going towards Mission Possible 2. Laukkanen has also set up a GoFundMe for direct donations to the cause.

Do you like buying cool things and/or supporting good causes? Our volunteers are hosting an online auction to benefit @PawsUnitePeople and the former veterinarians of Kabul.