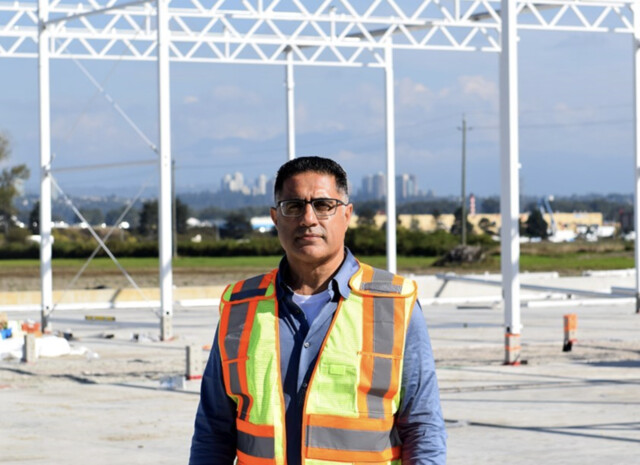 Photo: Megan Devlin/Richmond News
Vancouver-based marijuana stock promoter Avtar Dhillon was charged with securities fraud, conspiracy and obstruction in August 2021. On September 21, 2021 he agreed to plead guilty to a new set of felonies

The founder of a high-profile but failed B.C. cannabis company has agreed to plead guilty to three felony securities offences in the United States.

Stock promoter Avtar Singh Dhillon — who already faces civil and criminal trials for his alleged involvement in a massive and complex $1-billion international stock fraud arrangement — was charged by the U.S. Attorney’s Office of the District of Massachusetts in connection to two of his former American companies, including one that he controlled via his Vancouver-based parent investment firm.

Dhillon is a former Vancouver physician who currently resides, under house arrest, in Long Beach, California. He has agreed to plead guilty to one count of wilful failure to disclose stock sales, one count of aiding and abetting the sale of unregistered securities and one count of conspiracy to not disclose touting compensation. He is presumed innocent unless he is proven guilty in a court of law.

Alleged illegal arrangements with lawyer made over $1 million

On Sept. 21, Dhillon signed a plea agreement admitting to all three charges, stating he “does not dispute the accuracy of the facts set forth in the information” of the criminal indictment filed Sept. 30 in a federal court in Boston.

The pair is alleged to have concealed Dhillon’s ownership of Arch Therapeutics Inc. shares in a limited liability company named Walk on Water that Martinez created.

“It is alleged that Dhillon and Martinez then worked together to sell the shares in the open market without a valid exemption under the relevant securities laws and to distribute the approximately $1.34 million in proceeds,” states the U.S. Attorney’s Office indictment.

“The proceeds were distributed primarily to third parties for Dhillon’s benefit, with a small portion distributed to Martinez directly. Dhillon thereafter wilfully failed to report the stock sales to the U.S. Securities and Exchange Commission and the investing public, as he was required to do.”

EHP raised about $60 million in gross investment proceeds through the sale of 10 million shares, between March 2019 and March 2021. About $32.5 million was a result of the concealed paid promotions (newsletters), according to the indictment, which does not state any alleged illicit profits from EHP.

“The principal purpose of the conspiracy was to persuade subscribers of the subscription newsletter to participate in the offering by purchasing EHP shares, thereby providing financing for the benefit of EHP and, in turn, its other direct and indirect shareholders, including Dhillon,” stated the indictment.

On Oct. 3, Heppell announced EHP had reached a settlement with the U.S. Securities and Exchange Commission “to resolve the SEC’s investigation of the alleged concealment of a paid promotion of the company’s Regulation A offering in an investment newsletter.”

Heppell stated the company agreed to pay the SEC a $517,955 civil monetary penalty but neither admits nor denies the allegations in the settlement, which is subject to court approval.

“As an officer and significant shareholder of [Sciences], Dhillon enjoyed and exerted significant influence over EHP, including by serving as a board member for a period of time,” noted the indictment.

Shareholders of Sciences, according to court records, included Martinez and several entities connected to an alleged $1-billion fraud case the SEC claims was “masterminded” by offshore shell facilitator and former Vancouver lawyer Fred Sharp — who has defaulted on the case against him since multiple charges were laid in August 2021.

Heppell said Therapeutics, a Vancouver-area cannabis firm co-founded by Avtar Dhillon, posted $240 million in losses since 2015, after failed ventures in Richmond and Delta — although trading records show the private parent firm Sciences recorded an estimated $23 million in profits from trading shares of Therapeutics at the height of a promotion in 2017 and 2018.

Willful failure to disclose stock sales has a maximum penalty of 20 years in jail and a $5-million fine, while aiding and abetting the sale of unregistered securities as well as touting compensation nondisclosure conspiracy can each result in five years in jail.

In his plea agreement, Dhillon has forfeited his right to appeal a conviction and prosecutors have agreed to a sentence of incarceration “at the low end of the guidelines sentencing range” plus forfeiture of $1.49 million.

The plea has assigned a “total offence level” of 26 points, based on the serious nature of his alleged crimes and how he “wilfully obstructed or impeded, or attempted to obstruct or impede, the administration of justice.”

The U.S. Sentencing Commission table shows an offence level 26 with no prior criminal convictions (as is the case for Dhillon) could receive a prison term of 63 to 78 months in a federal prison.

Dhillon, 61, was a family physician in B.C. after obtaining a medical degree from the University of British Columbia, but over the past 25 years he had pivoted his career toward promoting mainly health science companies and claimed to have raised more than $1 billion from investors. He also served as past chairman of the Cannabis Canada Council and is a former member of the securities practice advisory committee to the B.C. Securities Commission.

The SEC describes their case as "a sophisticated, multi-year, multi-national attack on the United States financial markets and retail United States investors by foreign and domestic actors."

The group is accused of hiding their beneficial ownership of millions of insider shares through a web of local and offshore shell companies and brokerage accounts controlled by Sharp.