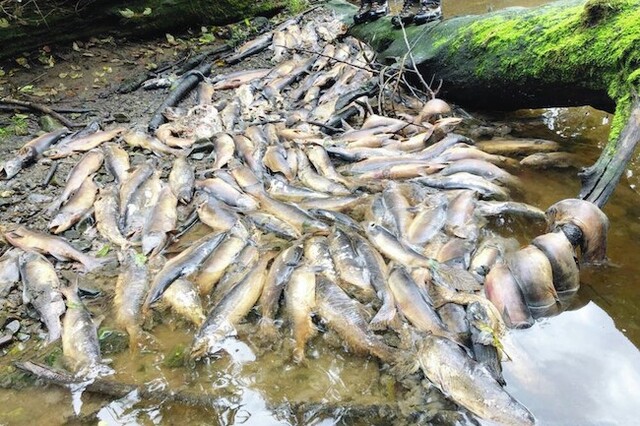 The images are shocking. Carcasses of thousands of wild salmon line a creek on B.C.’s central coast where this year’s hot and dry weather has created deadly conditions for many spawners.

The pink and chum salmon died before even getting the chance to spawn, William Housty, conservation manager for the Heiltsuk Integrated Resource Management Department, said Tuesday

Die-offs have happened in past years but not in such numbers, he said.

Housty has no doubt about what caused the mass die-off: “I would say that it is 100 per cent climate change because we have never seen this magnitude of pre-spawn mortality.”

His 77-year-old uncle, he said, has “never seen it this dry in September and October in his life.”

It’s normal for salmon to start heading up the creeks this time of year to spawn. But this year, salmon were trapped in and around Neekas Creek, north of Bella Bella.

“There’s nowhere near enough water for them to even think about spawning.”

Housty does not know how many fish died, but estimates it could be in the tens of thousands.

The temperature reached 24 C on the central coast on Sunday, he said. “Usually we are in a torrential downpour right now.” Rain normally fills the waterways for the salmon, providing them with needed cooler and deeper water.

Most of the nation’s food fishing has been completed, Housty said. The worry is that future years will see fewer salmon return because so many in this year’s cycle were unable to spawn.

Many locations in B.C. saw dryer and hotter conditions in September.

On Vancouver Island, rain would generally arrive in mid-to-late September, said Derek Lee, meteorologist with Environment Canada. But that didn’t happen and the 10-day forecast is for more of the same, although there may be a few showers later in the week.

The forecast for Bella Bella is similar, with the possibly of showers on a couple of days.

B.C.’s drought portal shows that the Sunshine Coast, Lower Mainland, and east and west Vancouver Island are at drought level four. The central coast is at level two.

Nanaimo announced Tuesday that it was extending its watering restrictions to the end of this month because of the drought.

The city and Nanaimo Forest Products will be releasing extra water from the Fourth Lake and Jump Creek reservoirs this week to send into the Nanaimo River to encourage chinook salmon waiting in the Nanaimo River estuary to head upstream to spawn.

There have always been droughts and floods and extreme weather events, he said, “but what’s happening is that they are becoming more intense and more frequent.”

These weather events are taking place as salmon numbers are declining from other causes as well, resulting in a greater impact on stocks, Hill said.

Some salmon runs have done well this year because they experienced cooler water temperatures for two years in the open ocean, he said.

But the dry conditions have affected fresh water systems and thus stocks in a number of areas. “There are definitely a lot of [salmon] populations struggling with really low, really warm water. And it presents all kinds of challenges.”

“When they are in warm water like that, there is less oxygen available and their immune systems become compromised. They are more vulnerable to predators and they have less energy.”

Low water levels can stop them from spawning and even if water comes in, they might not have enough energy to dig a nest and lay eggs by then.

Hill has heard that the famed Adams and Shuswap salmon runs are holding in Kamloops Lake because water levels are too low upstream.

Tom Rutherford of the Cowichan Watershed Society has more positive news, because because this year’s wet, cold spring and early summer allowed the system’s 1957 weir to store enough water to take care of the big Chinook salmon now swimming upstream.

About 1,000 are in the river now. A total of 6,500 are anticipated and the run is on target, he said. Chum and coho arrive later in the year.

The society is working toward installing a new weir as it looks to protect future runs because dry conditions and drought are expected to continue. “Climate change is here. We are seeing it every year,” Rutherford said

Nearby rivers without water-storage capabilities are struggling with lower water conditions, although not as dire as the Neekas, he said.

Hill said people need to do whatever they can to reduce the impact of global warming on salmon, including making salmon habitat as hospitable as possible to encourage spawning, being careful with fishing levels, moving fish farms away from salmon migration routes, and managing watersheds so there is enough water for freshwater systems.