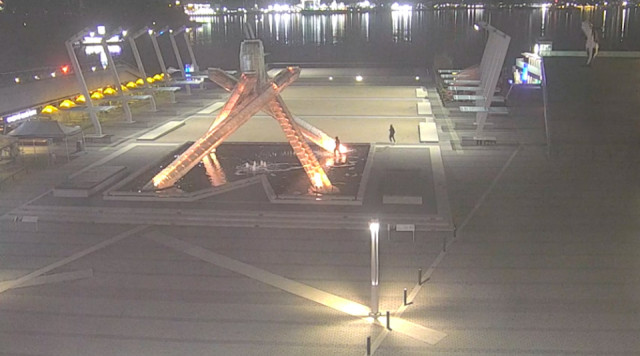 Photo: Photo via the Vancouver Police Department.
Vancouver Police have released footage of two people smashing theÂ 2010 Olympic Cauldron in October 2022. Anyone with information should contact the VPD.

Vancouver Police have released security footage of two people who smashed the 2010 Olympic Cauldron over the weekend.

Just after 3:30 a.m. on Oct. 1, the video shows the two suspects in the Jack Poole Plaza for 12 minutes. During this time, they "briefly approached the base of the cauldron before leaving," explains a VPD news release.

Thirty minutes later, the suspects returned to the area. One of them brought a tool to the base of the cauldron, while the other appeared to record the act on a camera.

“The video of the two suspects destroying a piece of Vancouver Olympic history is maddening,” says VPD Cnst. Jason Doucette. “And now that we’ve reviewed the footage, it’s obvious this was planned and deliberate.”

Police say the mischief has caused thousands of dollars in damage to the cultural landmark.

“These two will likely use the video for some sort of bragging rights, and when they do, we hope their friends will do the right thing and call police,” adds Doucette.

Anyone with information about this incident is asked to call the VPD or Crime Stoppers at 1-800-222-8477.

#VPDNews Vancouver Police have released security video of two people deliberately causing thousands of dollars in damage to the 2010 Olympic Cauldron this past weekend.