New CCP envoy on the job 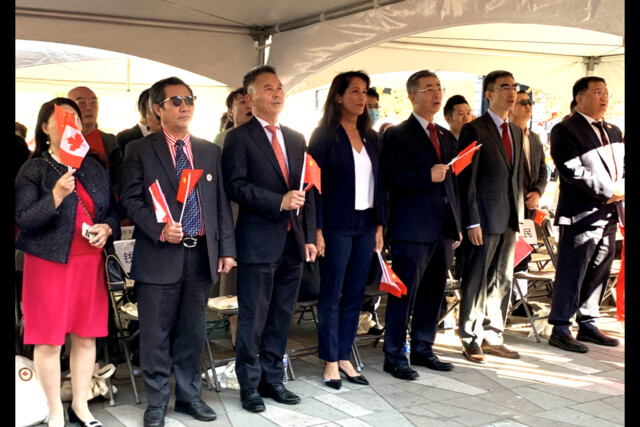 The Chinese Communist Party’s new, top envoy to British Columbia marked his first National Day of the People’s Republic of China in downtown Vancouver on Oct. 1 — the same day he also experienced his first human rights protest outside his Granville Street residence.

Yang’s open letter on the consul general’s website speaks to Vancouver being Canada’s gateway to Asia and B.C. being home to “a large number of overseas Chinese residents” and a destination for Chinese tourists.

Yang was joined on stage at the Vancouver Art Gallery by special guests, including Richmond city councillor Alexa Loo and CACA representatives Dian Qi Wang and Wei Renmin (director of Snow Goose Media) at the sparsely attended event, which saw delegates wave Canadian and Chinese flags. Oct. 1 is also the day China marks the anniversary of the Chinese Communist Party’s founding of the PRC.

CACA states online it is an umbrella organization for about 130 other groups who claim to be comprised of “mostly new immigrants from mainland China.”

CACA and its member groups are actively involved in local charitable work, but also politics.

Last February it publicly denounced critics of the Beijing Winter Olympics, stating the criticism was “due to reports of alleged but unproven human rights violations in China's Xinjiang region.”

Last January, a federal court accepted evidence from Canada Border Services Agency that the Overseas Chinese Affairs Office was conducting espionage against Canadians whose interests may run contrary to those of China.

CACA has declined multiple attempts to speak to Glacier Media concerning the judgment.

Meanwhile, on Oct. 1, Yang’s residence was the site of another protest by human rights activists.