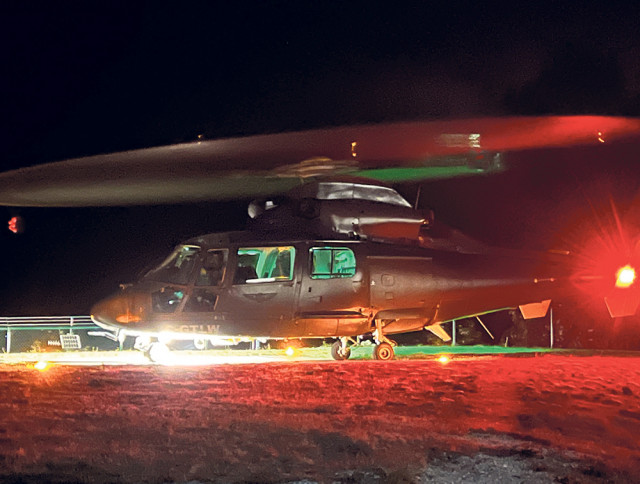 As darkness fell over Crown Mountain Tuesday night, a man’s arm sticking out of a narrow cleft of rock flashing a light from a cellphone was the only thing leading a helicopter team from North Shore Rescue to a hiker missing in the Hanes Valley area.

The rescue team had already searched the boulder field by helicopter as the light was fading, and hadn’t been able to turn up any sign of the missing man, said Mike Danks, North Shore Rescue team leader.

But on a final pass with night-vision goggles, suddenly they spied the top of someone’s arm protruding from the very top of a couloir – a narrow vertical seam in the mountain – waving a phone. “This person was basically in a slot,” said Danks.

It wasn’t much, but it was enough.

The rescue team had been alerted earlier in the afternoon, around 4:30 p.m., said Danks, when hikers on the summit of Goat Mountain heard screams for help, coming from the direction of Crown Mountain. At around the same time, authorities were also alerted by a report from the hiker’s wife, saying he was overdue returning home from a day hike.

Once the hiker was located, rescuers faced another dilemma, said Danks.

To date, the rescue team has not been authorized to do helicopter hoists with a rope at night, said Danks, so had to consider options of waiting until morning or contemplating a difficult rope rescue from the mountain face above, in the dark.

The situation highlights why the team needs the provincial government to authorize them to conduct night hoists, said Danks. “It will save a life.”

In this case, luckily the military’s Cormorant helicopter from Comox – approved to hoist at night – was available to help, and succeeded in plucking the hiker from the mountain around midnight.

Danks said the experienced hiker – a local man in his 50s – had set out by himself Tuesday to hike a particular route up Crown Mountain, but had gone off route and ended up in a difficult spot where he was unable to continue. He was also in a spot without cell service, said Danks.

The call highlights the need to carry portable satellite phone in the backcountry, said Danks. Luckily in addition to being heard by other hikers, the man had left a detailed trip plan at home – which narrowed the area for a search.