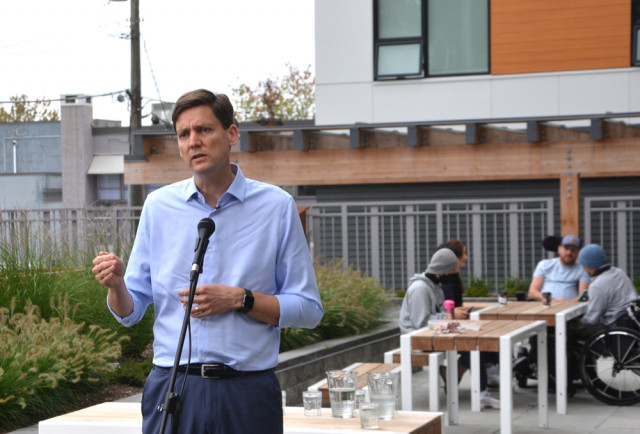 BC NDP leadership front runner David Eby was in North Vancouver Wednesday (Sept. 28) to announce a suite of housing policies the province will enact should he become premier following the party’s leadership vote in December.

Key tenets of the plan include a vast expansion of non-market rentals, tougher taxes on flippers, and a system to slow down demovictions.

The country’s population is growing at its fastest point since the Baby Boom in the 1950s, Eby said, but our housing stock has not kept up.

“This is unprecedented stuff. This is a level of involvement of the provincial government in delivering middle class housing that we haven’t seen since the '60s and '70s,” he told reporters.

One of the key planks is a new program called BC Builds to use public funds and partnerships with non-profits and builders for “attainable housing for the middle class.”

“This piece really responds to the challenges that we faced in expecting that the private market somehow is just going to build the housing that we need even though it hasn’t been doing that,” he said.

That program will include more capital grants for non-profits that build housing for First Nations, on and off reserve, and for people experiencing homelessness, as well as more money for treatment and supports.

Eby acknowledged the precarious state of renters living in older buildings, and the anxiety that comes when their buildings are sold for redevelopment. His government will bring in a $500-million program to help non-profits buy at-risk rentals “to keep those buildings running, to protect that housing, to protect those tenants, and to create opportunities in the future around redevelopment where those tenants are actually part of that,” he said.

To give them an edge over real estate investment firms with “bottomless resources,” that program would include first right of refusal for the province or non-profits to purchase multi-family properties when they are listed for sale.

Eby said the province will move ahead with a new punitive tax aimed at speculators who buy homes only to flip them for a profit in less than two years.

“That’s just not fair. We already have a challenge with housing. Families shouldn’t be competing with investors for a place to live,” he said. “This tax will be aimed at very specifically taking the profit out of that transaction for short-term flippers.”

Eby said the tax will have exemptions for builders and people who are forced to sell because of changes in their life circumstances. Revenue generated from the tax will be put toward new housing.

Under Eby's plan, strata councils would no longer be able to prohibit owners in their buildings from renting their condos out.

“We can’t have a situation where a unit is sitting vacant and there are families that are desperate for housing,” he said.

Eby has previously hinted that municipal councils that stand in the way of rezoning for new housing may find their powers being overridden by the province. Eby said there will be legislation for municipalities to set and meet targets for new homes as determined by their housing needs assessments, along with provincial support to accommodate local population growth.

“The provincial government will be there to support you with the transportation needs that you have, the amenities, the arenas, the parks, the trails, and to support that population growth,” he said. “We can’t have cities that are opting out of housing. It’s essential infrastructure. It’s like electrical wires, it’s like sewage. We can’t have families that are forced out or priced out of communities because the city is not approving that housing.”

In that vein, Eby said secondary suites that meet the B.C. building code will be legalized across the province, and there will be a new process for building triplexes on single-family lots that is no more bureaucratically onerous than the one property owners must go through when building a new single-family home.

“That seems completely backwards to me that the more affordable housing option that helps people get into the market is in fact the most complicated, the most expensive and most challenging way to move forward,” he said.

The leadership hopeful is also promising to crack down on skulduggery in the housing market, including going after tax cheats, the property assets of those suspected of being involved in organized crime, and by closing loopholes for bare trusts.

Having a healthier housing landscape will have benefits across the province, Eby said, by providing more energy efficient buildings, reducing the need for long commutes and allowing employers to find badly needed staff.

“So many of the challenges, whether it’s related to growth, climate, or the economy, are related to housing,” he said.