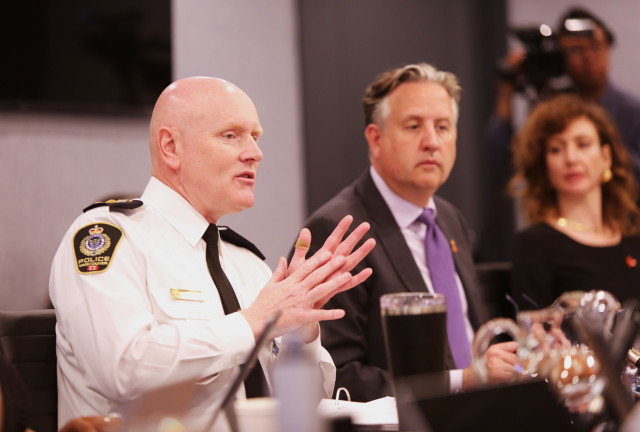 Vancouver Police Chief Adam Palmer is not saying which civic political party or mayoral candidate would benefit operations of the department – but is clear more officers are needed to handle the workload.

So far, ABC Vancouver, the NPA, Progress Vancouver and TEAM for a Livable Vancouver have all committed to provide funds over the next four years to increase the authorized strength of the Vancouver Police Department, which is currently at 1,348 officers.

ABC is the most ambitious, promising to hire 100 officers, while the NPA, Progress Vancouver and TEAM have agreed to fulfill a commitment made by the previous Vision Vancouver-dominated council to fund up to 120 officers between 2017 and 2022.

“I'm listening to what everybody's saying, but as far as the electioneering side of it, I'm not going to weigh in on one candidate versus another — I’m going to stay neutral on that,” Palmer said in a recent interview. “What I will say though is that we are still in a period where we do need more resources.”

In 2017, the council of the day approved recommendations of the VPD’s operational review that called for an increase of 120 officers over five years. Palmer said the department is still short 60 officers from that commitment.

“We've done the research, we've done the reviews, and we're still not where we need to be to those agreed upon numbers from two city councils,” the chief said. “But as far as specific political platforms, I'm not going to say one's better than the other.”

A police staff report to the Vancouver Police Board Sept. 22 outlined concerns raised by Palmer and previous chiefs about the need for more officers, with Vancouver being a “core city” as one of the major factors.

“Because of its unique situation, Vancouver faces policing challenges and shoulders policing responsibilities that very few other Canadian jurisdictions of its size are asked to handle,” the report said. “Out-of-town visitors and commuters increase the demand for policing in Vancouver beyond residential population.”

The severity of violent crime, the concentration of “social challenges” in the Downtown Eastside and the under-reporting of crime were other factors listed in the report.

The chief acknowledged property crime, including break-ins to businesses, homes and vehicles decreased significantly since the pandemic was declared in March 2020, but said violent crime increased, particularly random attacks on citizens.

“I know COVID is still here, but as things start to settle down and we get into a rhythm with COVID and everybody learns to live with it, criminologists have told us — and we are seeing this — that crime patterns will get back to historical sort of norms,” Palmer said.

Mayor Kennedy Stewart, who doubles as chairperson of the police board, is seeking re-election but has not made promises beyond the commitment made by the previous council in 2017 to fund 120 officers between 2017 and 2022.

Stewart supported the police board’s budget request of $325 million this year but was among the majority of council to freeze the VPD’s budget in 2021. That led to a successful appeal by the board to the province, which resulted in an additional $5.7 million for the department.

In a campaign stop Sept. 20, Stewart promised to create non-police service teams to respond to situations in the city where homelessness, mental illness, addiction — or all three social issues combined — are causing concerns for residents and business operators.

Stewart said the teams would take pressure off Vancouver police officers, who respond to approximately 700 calls per day, many of them not related to Criminal Code offences.

At the same time, an independent report authored by Peter Lepine and Peter Lockie in relation to the board’s request for $5.7 million be added to the VPD’s 2021 budget, said officers responded to 13,592 mental health-related calls for service in 2020.

More than 84 per cent required police attendance because the situation involved harm, victimization, criminal offences and mental health apprehensions, said the report, noting more than 12 per cent of the incidents involved weapons.

“I just want to be clear that we want to see people supported in the health care system with whatever kind of issue they may have in life before they get into the criminal justice system,” Palmer said. “It’s a much better way to deal with it.”

One of the first duties of the new council will be to approve the city’s budget, which includes a portion worth more than $300 million for the police department. The chief is clear on what council can expect from him in the December deliberations.

“When we go back to city council for our 2023 budget, we're not going to be looking to reduce our budget or defund our budget because the province has set the precedent [with the $5.7 million],” Palmer said.

“We could do an even better business case now than we did with the last one with all the stuff that’s going on [in the city]. We're going to be looking to right-size the police department where it needs to be.”