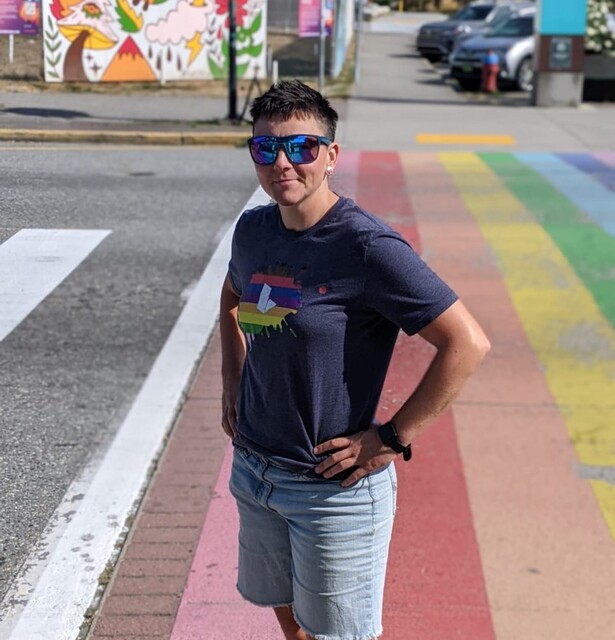 Just a few months after returning to Canada after living abroad, Lindsay Petley-Ragan decided to move to Squamish.

Petley-Ragan, who self-identifies as non-binary, said they previously lived in Vancouver, which they described as Queer-friendly and liberal. When they came to Squamish and saw the rainbow crosswalk in the heart of downtown, they expected to be welcomed just the same.

In need of a haircut, Petley-Ragan entered the Chicago Hair Gallery, which is just a few steps from the crosswalk.

"I went in with very high expectations that I could probably just sit down and get my hair cut right there," they said. "I was just shocked when he had no hesitation at all. He said, 'No you can't get your hair cut here.'"

After some further discussion, Petley-Ragan decided to leave.

Petley-Ragan took their business elsewhere, but was uneasy about what happened. After talks with supportive friends and seeing the Pride flag being raised at Squamish's Municipal Hall, they decided that they should talk about what happened to them.

"When I saw the flag going up for Pride Month, I was like maybe I have a second chance here," Petley-Ragan said.

"I want to keep it as a barbershop, strictly as a male barbershop," Bortolotto said, adding that he has been a barber for approximately 53 years. "This is a barbershop and I do male hair. It's as simple as that."

When asked if perhaps someone with short hair might deem the best person to cut for short hair, he responded, "That's true, that's true." But he also said that female salons would be able to do the short hairstyle just as well as him.

"I had four or five females come in. And I turned them all down. I said, 'I'm sorry. I'm sorry. This is a male barbershop.’"

Greg Robins, the executive director of the BeautyCouncil, said that he was unsure if the salons and barbershops that are geared toward specific genders have had the time to fully adjust.

“I don't know that the industry has had time necessarily to adjust to it, if their services are geared towards men or women,” he said.

A spokesperson for Pride Squamish, the local LGBTQ2S+ advocacy organization, said that its members have been working on inclusivity in town.

“We have been having ongoing conversations with local businesses, the District of Squamish and our community of allies. We acknowledge that information is available, but understanding ‘what to do’ can be confusing,” said the statement. “We encourage people to try. If you're going to make a mistake, make a mistake by including someone and making space for them to join.”

The statement added that they are here to celebrate and challenge the notion that people should handle incidents on their own.

“If tough conversations need to happen, we are here to have them with you.”

Petley-Ragan pointed out an organization called Strands for Trans, which operates a map of trans-friendly haircut spaces. At this time, the map shows no locations in Squamish but several in Vancouver and one in Pemberton.

But when it comes down to it, Petley-Ragan said getting a haircut just isn’t that simple for them.

“Do I go find a friend who's willing to cut my hair? Do I go pay the $60 to get an appointment where I feel comfortable? Do I go try another barber shop?” Petley-Ragan questioned. “It just isn’t easy.”

Ultimately Petley-Ragan hopes that by telling their story, it will spotlight ways the community can continue to grow.

“I wanted to share my story to highlight that while we have made some great strides, there is still a long way for us to go in making sure that people from all walks of life feel welcome and are treated equally.”