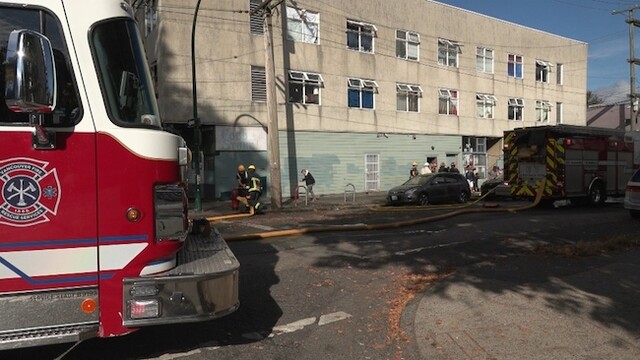 More than 50 residents were forced from their homes Saturday by a fire at a single-room occupancy building on Vancouver's Downtown Eastside.

Brian Bertuzzi, asst. chief of operations at Vancouver Fire Rescue, says the fire broke out in a suite and spread to neighbouring suites and through the ceiling to the floor above.

He says no one was injured but the building sustained significant smoke, heat and water damage and residents were evacuated.

Bertuzzi says the cause of the fire remains under investigation and it's unlikely that residents in the most damaged areas of the building will be allowed to return before Monday.

The building's address is listed online as Sereenas House for Women, a supportive housing project operated by Atira Women's Resource Society with 56 beds.

It is the latest in a string of blazes at single-room occupancy buildings, including a fire at the Winters Hotel that killed two people in April.