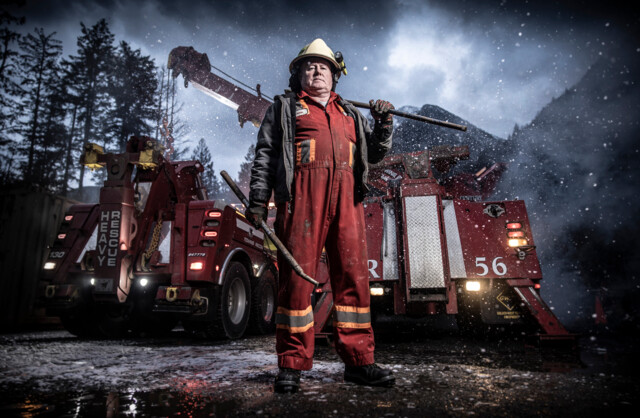 The premiere of Highway Thru Hell will feature the Coquihalla in ways it has never been seen before.

“We went from normal life to a natural disaster state of emergency,” says series star Jamie Davis. “We were trapped in our hometown. It really was an apocalyptic event.”

Season 11 of Highway Thru Hell features the unprecedented weather disaster of the 2021 B.C. floods, with local crews capturing scenes as the catastrophe unfolded

“Over the last decade, Highway Thru Hell has given audiences a striking picture of the challenges and danger inherent in keeping people and goods on the move, but this season is truly like no other,” says producer Nicole Tomlinson.

“I can tell you the first four episodes of the season, prominently feature the events that unfolded. So we were able to be let in by our cast and the communities, sharing themselves in very vulnerable moments.”

The season starts with the build-up and onset of the Atmospheric River that caused mudslides that wiped out highways and cut off communities.

"I think it's bittersweet in the sense that these weren't stories that I ever wanted to tell. Seeing the communities that we've been in for so many years, and the people who I've known for more than a decade, to have their livelihood on the line their homes, their loved ones, was really hard," Tomlinson said.

"So I'm proud of, of what we've done and I can say that we have coverage like nobody else in the world of what is now known to be Canada's biggest natural disaster. Nobody had access like we did, it's kind of a little bit of a happy story, but a sad story as well, you know, that we were in a position where we were rolling on that."

Tomlinson says viewers will be taken beyond last year’s headlines, to the "on-the-ground battles of grit, bravery, and heart, pushing through against impossible odds. And beyond the struggles and devastation, the enormous relief and celebration as they open the highways, and the winter recovery season begins."

"One of the interesting things you'll see in the first four shows is a lot of the intimate kind of phone moments where the cast are shooting themselves because we didn't have access, or it was unsafe."

Tomlinson says the B.C. Ministry of Transportation shared their drone footage, "so we've licensed that, get ready for drone footage like you've never seen before."

The new season of Highway Thru Hell will premier on the Discovery Channel on Monday, Sept. 26 at 6 p.m.