Sunken barge near Campbell River to be removed, scrapped

Sunk barge to be removed 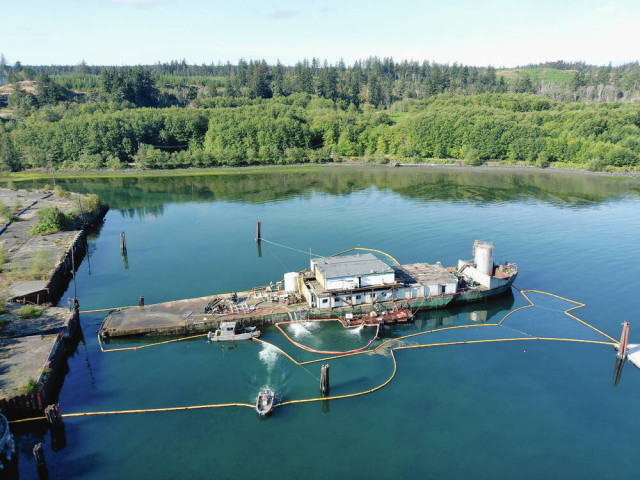 A company contracted by the Canadian Coast Guard has started removing the ­remaining fuel from a sunken barge at Duncan Bay, north of Campbell River.

The 98-metre Trailer ­Princess will be removed from the water, where leaking fuel continues to threaten the marine ­environment, and deconstructed for recycling.

The Trailer Princess, ­originally built in the U.S. as a Second World War ­landing craft, was most recently used as a ­support barge for a ­logging ­operation and was outfitted with a helicopter landing pad and refuelling stations.

It was reported to be listing by a ­helicopter pilot on Feb. 14 and later sank.

About 89,000 litres of ­hydrocarbons and oily water have been removed since the sinking, according to the coast guard.

During the initial stages, the coast guard removed 34,000 litres of gasoline, diesel and jet fuel from the barge’s tanks. However, crews have been ­unable to safely access all areas of the barge, including below-deck spaces.

The Canadian Coast Guard has hired AMIX/Marine ­Recycling Corporation to remove the remaining fuels onboard and re-float the barge in preparation for its removal, deconstruction and recycling. Since the contracted work began in August, AMIX has removed 55,000 litres of hydrocarbons and oily water.

The coast guard plans to recoup the costs of the $4.7-million cleanup and deconstruction — expected to take 40 days — from the barge’s owner. ­“Canada follows the polluter-pays ­principle,” the coast guard said in a statement.

Registry records from ­Transport Canada show the Trailer Princess belongs to ­Middle Bay Properties Inc. of Campbell River, which acquired the barge in 2020.

Working with the Wei Wai Kum First Nation, the coast guard has put two l­ayers of boom and absorbent ­material around the barge, and will ­oversee the salvage ­operation.

It said problem vessels across the country are addressed in order of priority, based on level of risk.

Originally a U.S. navy l­anding craft and support ship built in 1944, the Trailer Princess was converted into a rail ferry in the 1960s and operated by ­Canadian Pacific.

In 1966, the barge was used as a carrier with four tracks that brought rail cars to the Island.

The barge was later sold and converted into a support vessel for a logging camp in 2003, and has had various ­owners since.