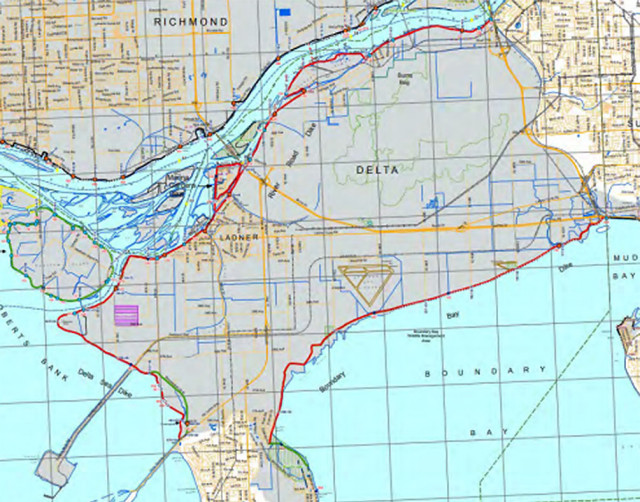 Delta wants some help, more than a million dollars’ worth, in order to raise a half kilometre of the Boundary Bay Dike Trail by 1.3 metres.

The city is applying to a provincial program called the Green Infrastructure: Adaptation, Resilience and Disaster Mitigation Program.

If successful, the city will be able to raise the dike to protect against future sea level rise.

The city has already created its design for the improved dike and submitted it to the Provincial Inspector of Dikes. The design includes pullouts for bicycles to allow passage of farm vehicles, and can also allow extension of the raised dike if more money is available.

Under the province’s disaster mitigation program, Ottawa pays 40 per cent, the province pays 33 per cent and municipal governments pay 27 per cent of a project’s cost. Deadline to apply is Oct. 11.

A preliminary estimate for the project is $1.55 million. According to a staff report, the city would have to pay $412,000.

Coun. Jeannie Kanakas asked if mayors at this month’s Union of B.C. Municipalities convention in Whistler asked the province to take over funding of dike repairs.

That resolution passed but there’s been no commitment from the province, said Mayor George Harvie.

But he said municipal politicians will be pushing the province to take over responsibility for dikes.

“As we know, there’s no city, no city in the province that can do this on their own. If they tried to do it on their own, they wouldn’t be able to balance their budget and they’d have to cut back services,” Harvie said. “We really need to pressure the province to do the right thing and take back the responsibilities that they tossed over to us.”

One resolution from UBCM that was presented by the Central Kootenay Regional District asked the province to create a strategy to reassume responsibility for “existing abandoned berms, dikes, dams,” that protect homes and infrastructure.

Another resolution called on the province to take on a greater role in flood mitigation.