'Taller people may find it challenging': This Vancouver rental unit will probably bruise some heads 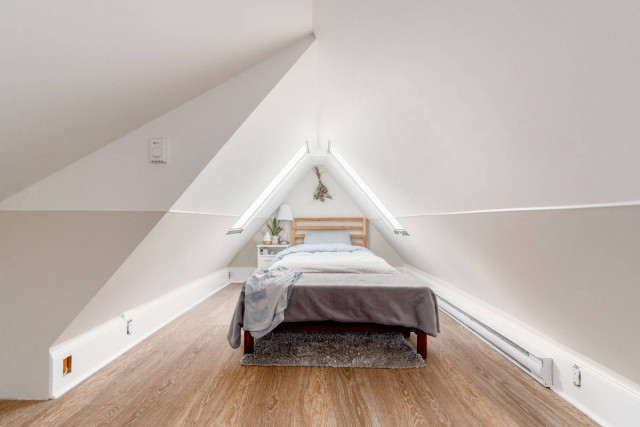 Photo: .
This home in East Vancouver has a very short ceiling.

With many people looking for an affordable home in Vancouver, there are some odd options out there.

In this case there's essentially a bachelor apartment in East Vancouver. And while it's got around 500 square feet of space, sky lights, and a variety of amenities, one aspect may be an insurmountable issue for some.

At its highest point, the attic apartment's ceiling is only 5'7".

Lots of people are under 5'7", but with the steeply sloping ceiling dropping quickly, the peak is only in some areas, mostly the middle of the space. With lots of sloping, angular parts to the ceiling due to the roof, it's likely to catch newcomers by surprise at some point.

"Taller people may find it challenging," states the person who wrote the ad. "I want to be clear and honest so as not to waste anyone's time."

While the height may make it a hard pass for some, for those a little shorter than average the unit comes with a fair number of amenities for its price.

The unit has a bed, living space, sink, and a mini fridge, but there's no cooking allowed due to the fire hazard. In the photos, it's furnished, but it's listed as unfurnished. There's laundry in the building and street parking. There are also four skylights and a view of Trout Lake, the ad states.

It looks like a bachelor pad, but it's actually one room in a shared house. The rent is $975 per month.

"You are welcome to share our huge, beautiful home," writes the person who placed the listing. "There are two luxurious walk-in showers, a soaker tub, and a wonderfully landscaped, private, backyard."

The average rent for an unfurnished one-bedroom unit in Vancouver cracked $2,650 this month,